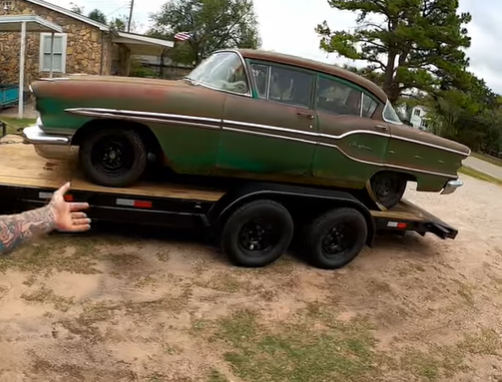 The insane number of “Will it Run?” videos that you find on YouTube now are kind of annoying sometimes. Why? Well because if an engine was running when the car was parked, no matter how long ago that was, it will likely run again unless it is locked up beyond belief. Old engines are still engines and they want to run. It’s what they are meant to do, so as long as you have enough compression, some fuel, some air, and spark that happens at the right time then an engine will run. So the will it run videos that have someone confident about their abilities to make it run are the ones I like, where as the ones where someone is being overly dramatic and fake don’t do it for me at all.

This video here from Puddin’s Fab Shop is pretty cool because he’s gone and picked up this cool car for his buddy and then spends some time making it run. He does spend some extra time to check a few things out before trying to start it, and while he could have done even more he is doing more than most people would have. The end result is some funny, smokey, and slightly dramatic footage that has the funny slant that Puddin always brings to the table.

Check it out and see how this thing really performs when done.

SEMA Show 2021: Our Photos From The 2021 SEMA Show Just Keep Coming! Check Out The Latest Gallery! Ride With Ollie Bryant In His GT40 As He Qualifies On The Pole At Spa...In The Dark