Rumor And Video: Mike Ryan, Driver Of The Drifting Freightliner, Is Shooting A New Crazy Video 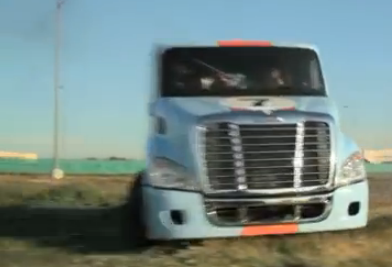 When Mike Ryan came out with his first video, Size Matters, it set the internet on fire. Sure it’s kick as when Ken Block gets all bad ass in his all wheel drive rally cross car, but Mike Ryan is doing this crap in a 9,955 pound BIG RIG. Well big rig and race fans, another one is on it’s way. A little bird just told us that Mike is planning his second Size Matters video and that it will be shot soon. We are actually reaching out to see if we can somehow be involved, and we’ll keep you posted as stuff gets closer. We’ve seen the script for Size Matters II and can tell you it is bad ass at a level never seen before. We aren’t able to tell you much more yet, as we’ve been sworn to secrecy, but if we get on board to help on this deal we’ll make sure you get some kick ass behind the scenes content, along with the finished video.

The coolest part about Mike Ryan’s truck is the fact that I’ve actually gotten to ride in it for several laps, and a ton of sideways action, at the Optima Ultimate Street Car Invitational in Pahrump Nevada. To say this truck hauls ass would be an understatement. To say that Mike can handle this big pig is an even bigger one. It’s awesome in every way, which should be no surprise considering the fact that it has won Pikes Peak multiple times, along with every other thing it’s been entered in. At the 2013 Optima Ultimate Street Car Invitational Mike drove the truck, during only his second time on this track, to a time that would have put him in the top half of the field at OUSCI. That is incredible.

Check out both Mike’s Size Matters video and another one showing him doing drifting practice at Irwindale below.

NutJob: A Brave New World Of Performance - Why The Kia GT4 Stinger Is A Game Changer The Best Ad For An Unfinished Project Car Ever Comes From Australia

One thought on “Rumor And Video: Mike Ryan, Driver Of The Drifting Freightliner, Is Shooting A New Crazy Video”