Sideways, With Rodney Prouty: Being The Underdog May Be A Handicap, But Rodney Doesn’t Show It 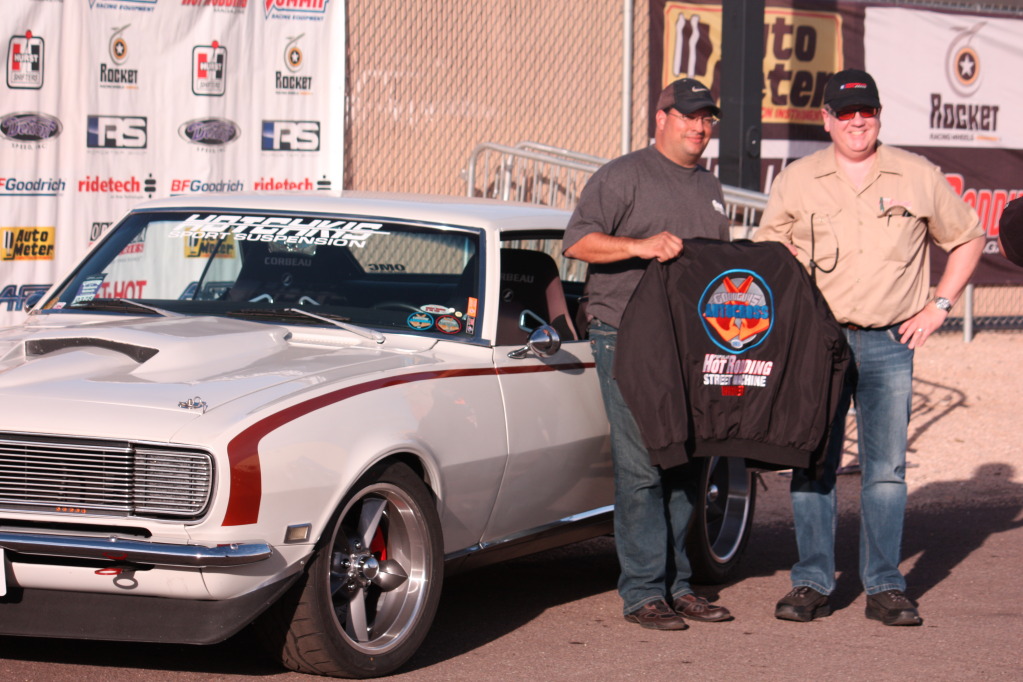 Sideways, with Rodney Prouty, shows the trials and tribulations of a regular working stiff who built his car on his budget, drives it every day, and races it as often as he can. Oh and did I mention he wins too? Well this weeks Sideways touches on the fact that a lot of people think he and his faithful Camaro are “handicapped” when it comes to competing with the big boys. Check out Rodney’s take on that.

If you have missed any of Rodney’s Sideways columns, CLICK HERE TO SEE THEM ALL.

Actually, I didn’t really know until I hit Run To The Coast a couple of weeks ago; but more on that later. As you know, I’ve been running pretty decent times in my little Plain Jane Camaro. I even managed to pull off a win at Goodguys Southwest Nationals in Scottsdale, Arizona last Fall.

With regard to that win, Popular Hot Rodding said:

“The big news in Scottsdale is that we had a severely handicapped underdog come from behind for the win. It’s the first time we can recall this happening in the Street Machine competition.” 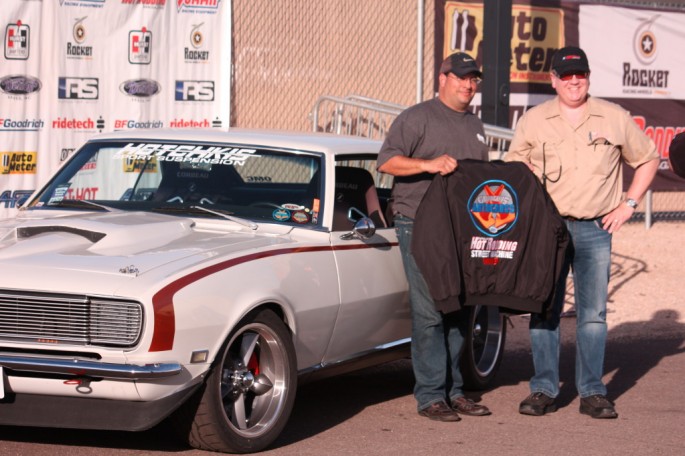 Before I address my ‘handicaps’, I’d like to point out that I held the winning time and first place on the leader board for the entire three days of competition—my time gradually got better but I was always in first place. Granted, Jeff Schwartz was gnawing on my bumper with mere tenths of a second to take the title, during all of Saturday’s racing. The race came down to a nail-biting finish but not once was I coming from behind. I am not knocking this great magazine’s coverage, after all the writer is one guy with a bunch of camera and video equipment trying to stay on top of hundreds of cars and more than 70 drivers. I am always impressed when this particular journalist remembers me and my car with kind words and I’m lucky to have had several mentions in the magazine for different appearances and accomplishments.

I think the key to this statement is that the writer thinks I’m severely handicapped. After all, how could a guy who’s plain looking off-white car (I assume he’s talking about the car…) be in the lead at a major event? It must be a fluke, right?

In various portions of the article, the features pointed out about my car (as being remarkable in aiding a win, I assume) are my motor, trans, suspension (minimal bolt-on) and the size of my wheels. I run a homebuilt muscle car—I suppose that implies that there are faults. Not sure what those faults are but I’m pretty sure none of them are making me slow.

There is absolutely no chrome in my engine compartment and I went old-school and painted my LS block orange like it’s 383 predecessor, this must imply that the motor is slow.

Almost all of my suspension modifications are “bolt-on”; this is puzzling. Bolt-on says that I have installed a proven product, tried and tested on many cars before me. I did not rely upon my limited (okay, non-existent) engineering background and fab something new, unique and unproven; not my core competency. I figure that RideTech and Hotchkis and Dick Guldstrand have a whole lot more experience at building successful suspension systems. Additionally, I read every bit of information that people like David Pozzi, Mark Stielow and others write about suspension geometry, construction and methodologies. I’m not nearly smart enough to have figured it out all on my own, but I do know what I want the car to do, so I do what the experts say will make that happen – and what I can afford. 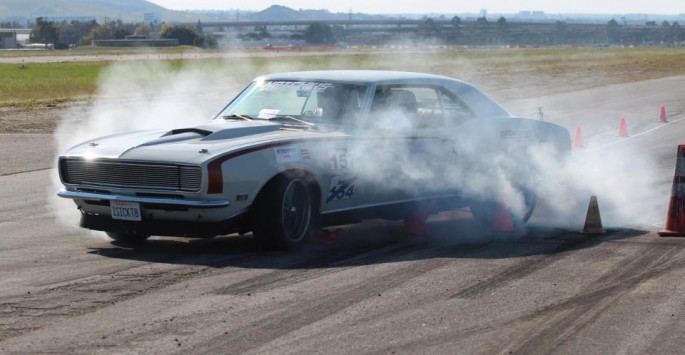 I run 17 inch Coys wheels in a simple torque thrust style. I would love to run some 18 or 19 inch Forgelines but nevermind the original purchase price, have you ever priced tires for those wheels? Seeing as I burn through a set of tires about every four months, I would never be able to buy enough tires to actually race on. Speaking of tires: I run Falken Azenis pretty much what everyone else is running these days, albeit mine are slightly smaller. Recently, I decided to swap out my Falken’s for some tires that I had won at an event in order to burn them up at Run To The Coast (an event known for chewing up tires like yesterday’s gum) – what a mistake. The tires were marketed to autocrossers and were touted to behave like 200 tread wear with street wear like a 300. It was a lie. Everyone has their personal preferences and I’m not going to try and talk you into anything, but if you want to be a winner, your best chance is to emulate those who are –both in driving skill and equipment. An easy thing to do is consider what tires fit your needs the best. Falken seems to be showing up more and more on winning cars in Autocross – don’t forget I primarily race autocross– you drag and big course guys will have a different opinion. I asked around and decided that Falken was a good fit for my driving needs (both on and off the track) and the price point was not as prohibitive as some of the other products available. I should mention that NO ONE is running the tires that I tried out at Run To The Coast and they were promptly left behind at the tire shop when I had the new Falken’s mounted. Those tires nearly ruined my event by handicapping my skills like nothing else could and pissed me off even more, when I had to drive over 500 miles home on the flat spots created from multiple skids and spins on the track. 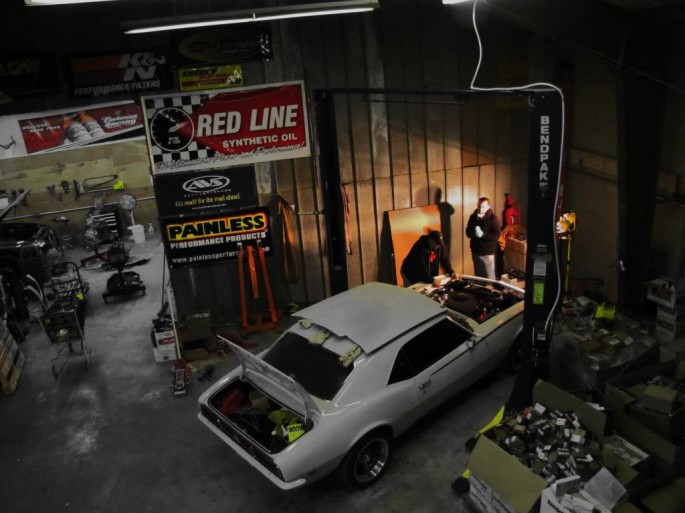 Okay, back to the car. I run a six liter LS; okay, what’s wrong with that? Plenty of cars are running LS1s and no one seems to think that they are underpowered. I chose the six liter for a a lot of reasons – cost was definitely one of them but low-end torque and power combined with decent horsepower were also key. I would dream to drive an LS7 or custom LSX but c’mon guys I’m the guy who built my car in my garage on a rack made of wooden 2x4s.

I run a Borg Warner Super T-10 4 speed transmission. Okay, this might be a little old-school but it works, to this day, in many racing environments and it really works for me. While I love the torque and engine ‘stop’ of a four speed, I wouldn’t mind the overdrive of five or even six gears when driving those long hauls – I won’t lie. Maybe some day, I’ll be able to upgrade on my tranny but for now, it’s almost never a handicap.

The end result is that my car, whether driven by me or my girlfriend, tends to beat a lot of high-dollar cars with fancy and admittedly beautiful paint jobs, hiding nearly the same equipment as mine underneath. Oh wait…. there is that lack of chrome. 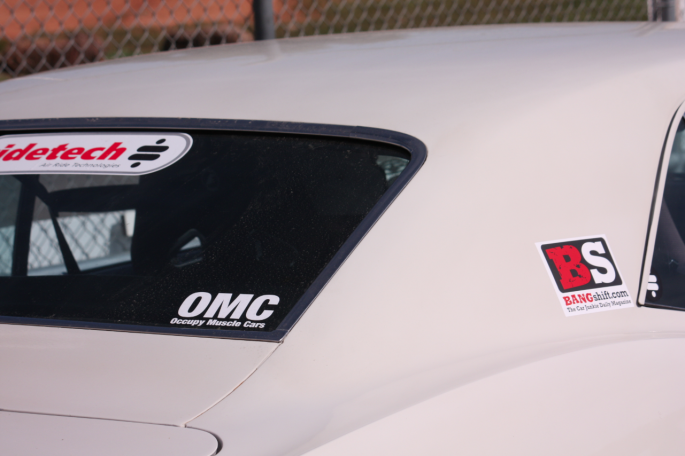 So back to what it feels like to be handicapped: I don’t really know. My car is not flashy and it wasn’t built by a hot celebrity builder but it’s not that far from those that are when it comes down to equipment. This being said, there are plenty of high-dollar builds that are probably always going to beat me but that won’t discourage me from trying. I will compensate for my lack of dollars with my talent as a builder and driver and I will always try my hardest to win and learn how to be even better. Driving my car is every bit the sport I hoped it would be and I have gained immense amounts of courage, self-esteem and friends as a result. Not bad for a guy who’s severely handicapped, if I do say so myself.

Editor’s Note: Big thanks to Rodney for contacting us and asking if we would be interested in his story. If you have an idea for BangShift.com content, please CLICK HERE and submit your idea, story lead, or whatever.

4 thoughts on “Sideways, With Rodney Prouty: Being The Underdog May Be A Handicap, But Rodney Doesn’t Show It”