Awesome, Weird, Or Hmmmm? This Paint Shaker Attachment For Your Sawzall Could Be Epic Greatness Or An Epic Fail

May 27, 2021Chad ReynoldsHack of the Week, OTHER, TECH, Tech Stories, Videos3 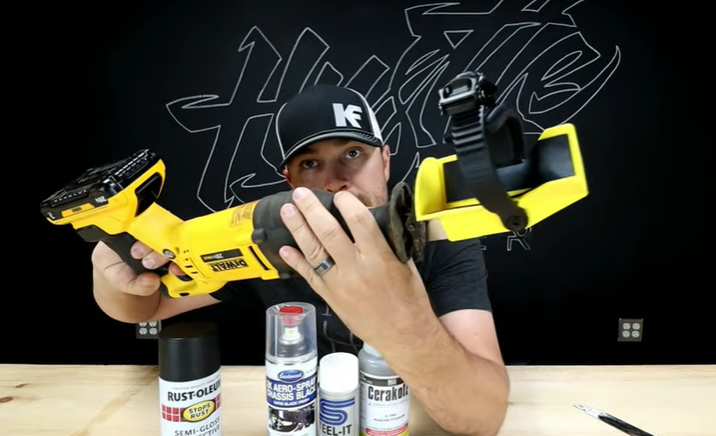 You ever see a tool and wonder why someone thought of it? It happens to me all the time. Sure, most tools are useful for lots of people, but there are also plenty of them that are so specific as to only be useful to a small group of mechanics, or carpenters, or tradespeople. But you never know. And then there are tools that are convenience items that are aimed at the person that just needs to have the fun tools. This one might fit into that. The video below is from Kyle at Fab Forums and it is one of his “It’s Friday Fool, You Need This Tool!” series that sometimes inspires me to want more tools. Not always, but usually more than half the time. This one though I’m not sure about.

It’s a paint can shaker designed to go into your Sawzall, in place of the blade, and when a can of paint is mounted into it and the trigger is pulled it will shake the hell out of the can so you don’t have to do it by hand. First thing, I know that technically they are called reciprocating saws and that Sawzall is a brand name. Shut up. Everyone calls them a Sawzall, unless you are my brother who calls them a Sawsmost, because the term is generic like Kleenex. So if you want to waste your time saying reciprocating saw, knock yourself out. For the rest of us, we’d mount this in our Sawzall and get to shaking.

Here’s the thing though. I do understand that there is a point at which you are tired of shaking the can of paint. I do understand that. And I do understand that the can says shake for two minutes because if it isn’t mixed properly it won’t perform properly. I also know that it is likely okay to spray the pain after just one minute of shaking or they would have said four minutes instead of two. Just saying. If I really care about what I’m spraying, I shake it like a polaroid picture for two minutes. If I don’t much care, then I shake it until I don’t want to anymore and give it a test spray and see if it looks already and then lay it on. Just saying.

I want to see a paint can launch out of this sucker, break the cap off of it, and then spray paint all over the shop when the nozzle gets stuck. Or worse yet, fly out, break the cap, and smash the end so you can spray it at all.

Again, Awesome, Weird, or Hmmmm? Answer in the comments below. And watch the video.

Holy Crap, This Might Be The Baddest Throttle Body Ever Invented! Serious Game Changer. The ICON 102 From Motion Raceworks $1,000 Build: So Close To Done! The $1,000 F100 Build Is So Close We Can Taste It, But Is Staying On Budget Even Possible?

3 thoughts on “Awesome, Weird, Or Hmmmm? This Paint Shaker Attachment For Your Sawzall Could Be Epic Greatness Or An Epic Fail”