Edd China’s Workshop Diaries: Will The Range Rover Finally Start? Or Has All This Work Been For Nothing?

Jul 17, 2021Chad ReynoldsENGINE, ENGINES, TECH, Tech Stories, VideosComments Off on Edd China’s Workshop Diaries: Will The Range Rover Finally Start? Or Has All This Work Been For Nothing? 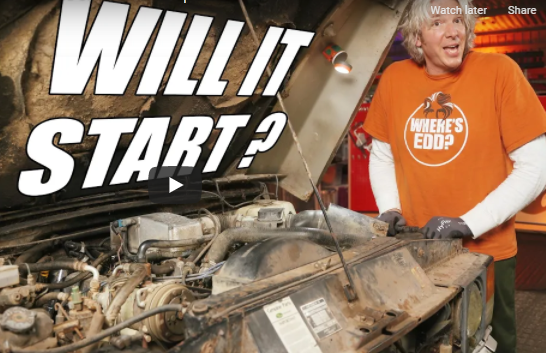 What started out as a simple job of getting his buddies Range Rover back running, has turned into a lot more of a project for Edd. This beast had been sitting for some time, but I don’t think Edd had any real plans to replace or restore the entire fuel system on this one, all while trying to work on other projects as well. But that’s exactly what he had to do. Every fuel line was replaced due to rust holes in the lines themselves, plus serious effort going into cleaning up the gas tank so it could be reused. Cleaning the fuel tank would end up being more difficult than you might think, but that just gave Edd a reason to get creative. If you missed it, then know that you can click the link below if you want to see how he used a cement mixer to do some real cleaning.

Creativity has never been one of Edd’s weaknesses so watching him go through this Range Rover has been kind of fun. He’s replaced so much, so we are crossing our fingers that this sucker starts after all this work.

Here is the description Edd put on the video:

‘Will it start?’ is THE question we have all been wondering about since John’s garden find 1986 Range Rover was pushed into the workshop! Having already installed some custom made fuel lines and a new fuel filter, this week’s job is to install a new fuel pump and sender into our freshly de-rusted fuel tank and then get that tank re-attached to the car. Surely once the fuel is flowing the engine will start?… Or will we find something else that needs to be fixed first?…

Is The Ultimate Pit Vehicle A V8 Powered Barstool? Why Is This Both Scary And Exciting? Flathead Tech: How Ardun Overhead Valve Heads Work On A Flathead Ford