LS Power Improvements: How The Wally’s World GTO Got A Bunch More Ponies 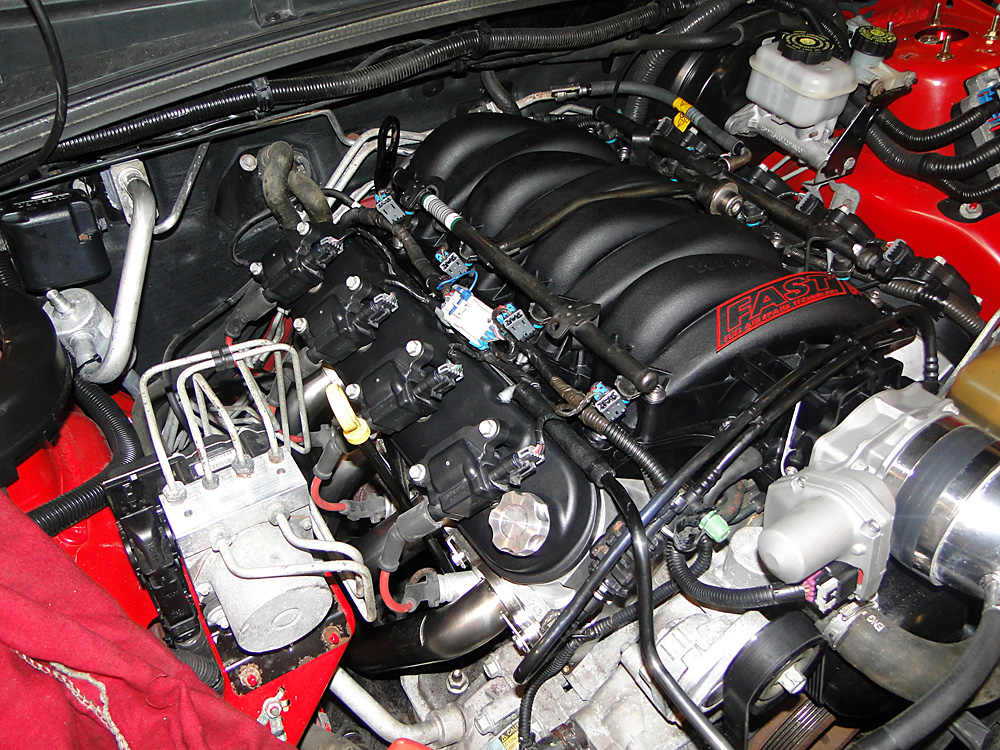 It’s been a while since we did an update on the Wally’s World GTO Project, mostly because we’ve been slacking, and also because all the new horsepower has been a lot of fun out on the racetrack along with all the Pedders Suspension. In fact, BFG better be ready with a new set of Rivals for this bad boy because thanks to Comp Cams, FAST, Dynatech and Holley there is a lot more power going to them. This update is all about those LS Power Improvements, and how we made them happen. When it came time to get more power out of the GTO’s 6.0 liter LS2, Wally knew who to call. With goals of 400 plus horsepower at the tire, this was going to require more than just a couple simple bolt ons, but nothing you can’t do to your LS powered machine. The baseline was 333 horsepower and 330 pound feet of torque. About what you would expect from the 400 horsepower factory rating with some exhaust and cold air kit additions.

To reach 400 horsepower or more to the tire, the guys at Comp Cams and FAST recommended their 92mm Intake, Fuel Rail Adapters, Comp XFI XE-R Hydraulic Roller Cam, Roller Rocker Assemblies, and pushrods to take full advantage of the great port work the guys at Land Speed Development were planning to do. Exhausting all the burnt gasses was left up to the guys at Dynatech who outfitted the GTO with their long tube headers and full H-pipe.

The XFI XE-R cam features Comp’s most aggressive hydraulic roller lobes of all their LS offerings, and that means this thing not only flows a ton but sounds like a raging bull. Even though the lobes are aggressively shaped, the specs are reasonable. Full specs are below, but the basics are 224/230 degrees of duration at .050 valve lift, and .581/.588 valve lift. Doesn’t sound too aggressive, but fire this bastard up and it makes some noise and some sweet sweet power. 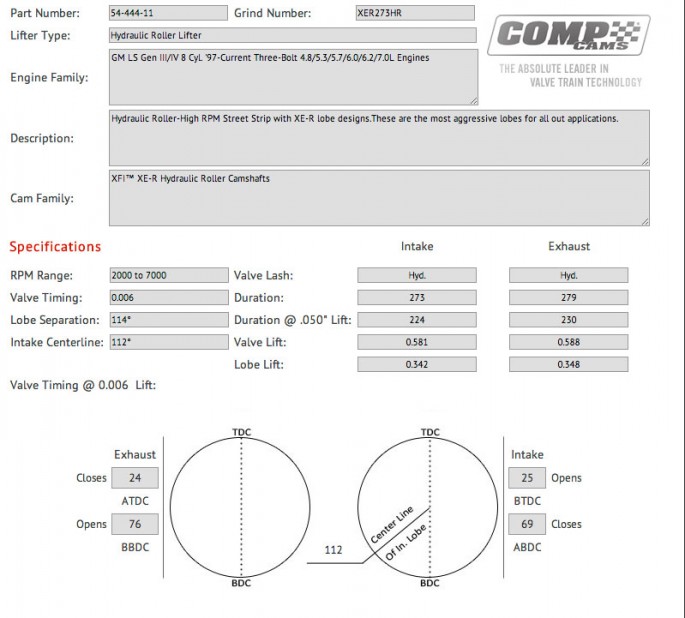 Despite the fact that the LS2 sounds ultra pissed off now, it’s still drivable and very responsive. Everyone is most certainly going to know you are in a hot rod, but it’s not not hard to drive every day with this particular cam combo. This is a power combo that anyone can put together and will be at home on both the track and the street just like the Wally’s World GTO.

To install the cam in an LS engine, you need to remove nothing but the front accessory drive, back off and remove the rocker assemblies, and then turn the engine over two times to hold the lifters up off the cam. In this case, since we were porting the heads, swapping intake manifolds, and doing the camshaft swap, the entire top end of the engine was disassembled. 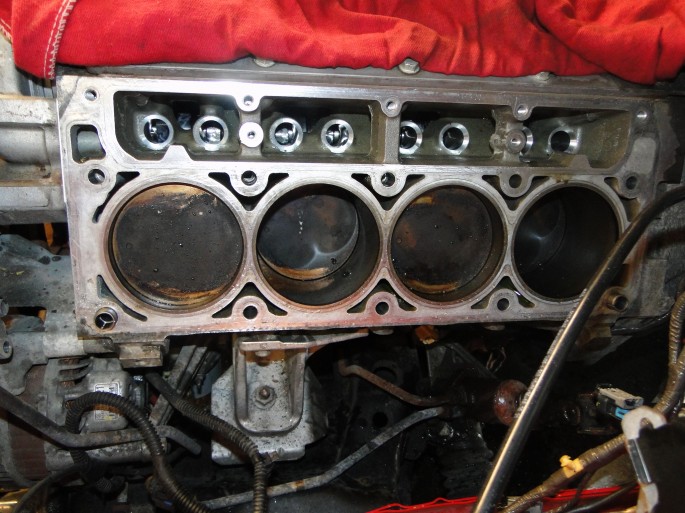 Land Speed Development was called in to help out with a nice porting job on the factory heads from Wally’s GTO, and after chucking them in the mill, the CNC magic started happening. Their CNC program has been proven on the dyno and the race track, and they knew exactly what to do to make more power without sacrificing the drivability of this particular combo. 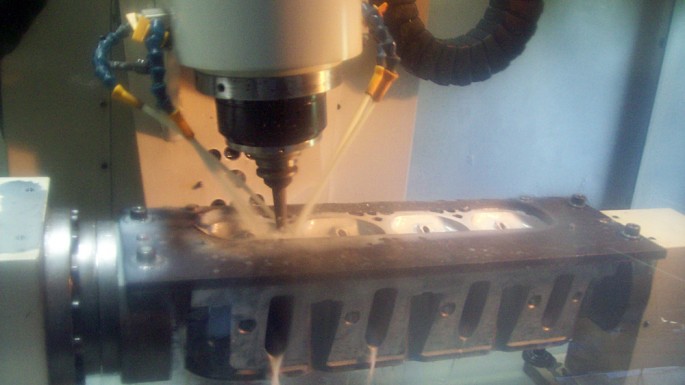 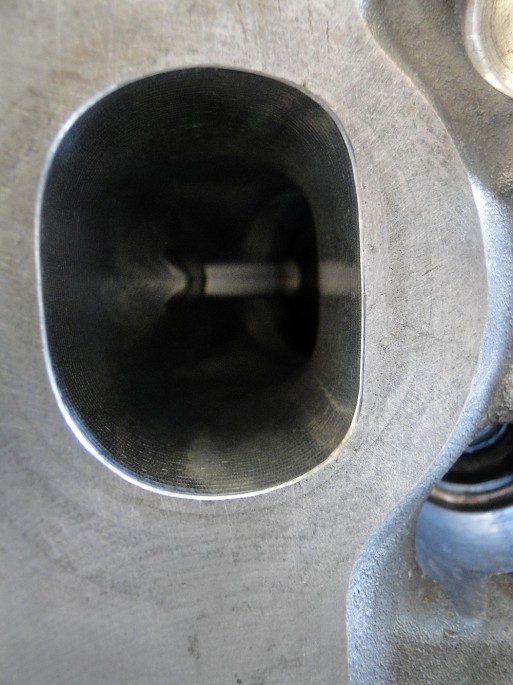 They port work done by Land Speed Development mostly focused on the port exit and valve pocket inside the exhaust ports, and the short side radius and guide area behind the valve on the intake side. Given the RPM range that the LS3 is going to operate in, and the components chosen for the rest of the engine, appropriate air flow and velocity is key. When making changes like this to cylinder heads, keeping your other component choices in mind is key to having a power combo that meets your goals.

With the camshaft installed, and cylinder heads back on the engine, it’s ready for the FAST Intake and stock fuel rails and FAST adapters to be put in place. 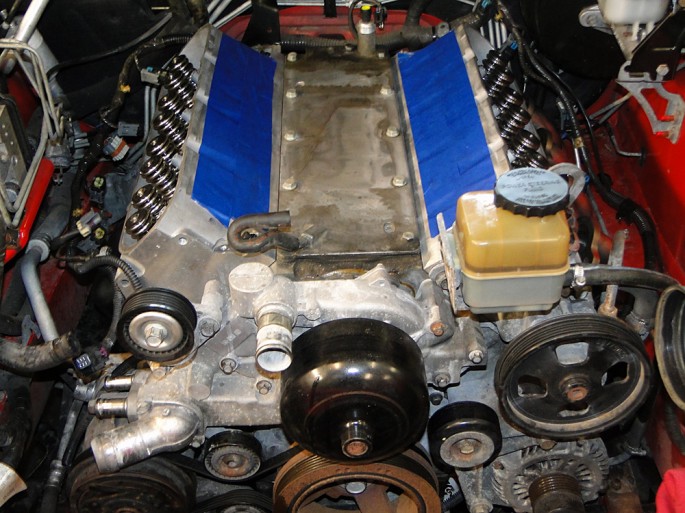 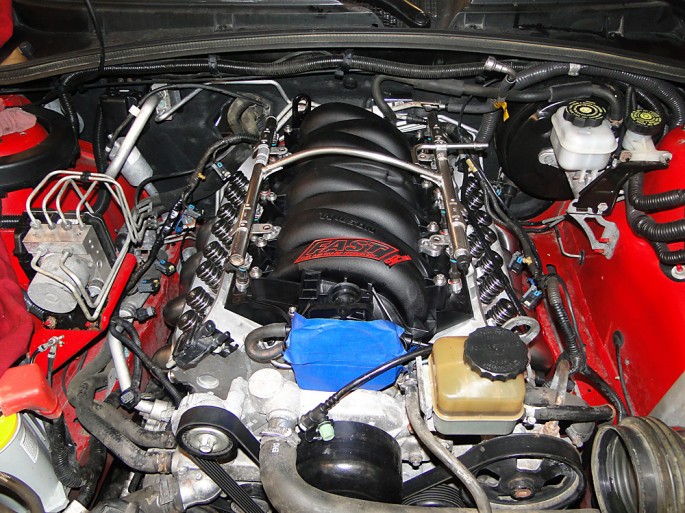 Now that getting the air and fuel into the engine has been handled, it’s time for a little bit of dress up from the guys at Holley who provided their bitchin Black Crinkle Finish Aluminum Valve Covers. These not only look a lot better than the factory pieces, but still retain all the rigidity and function of factory pieces so you don’t have to worry about leaks, or parts that don’t fit. Underneath the Holley Valve Covers are a set of Comp Roller Rocker Arm Trunnions. The Comp parts are perfect for increased rpm capabilities, stability, and horsepower. 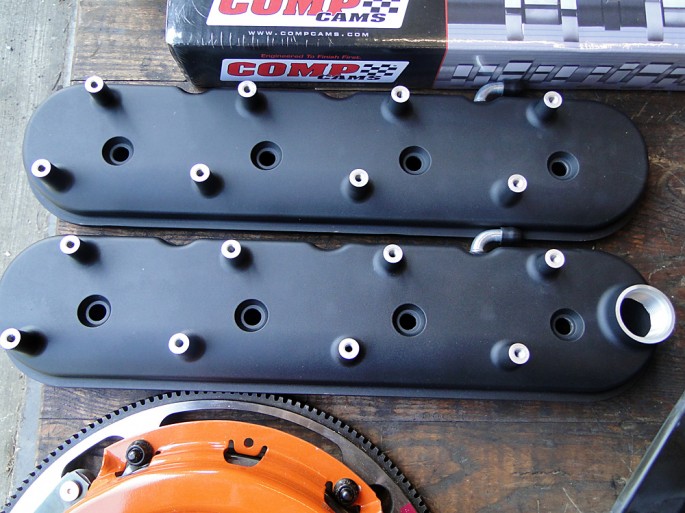 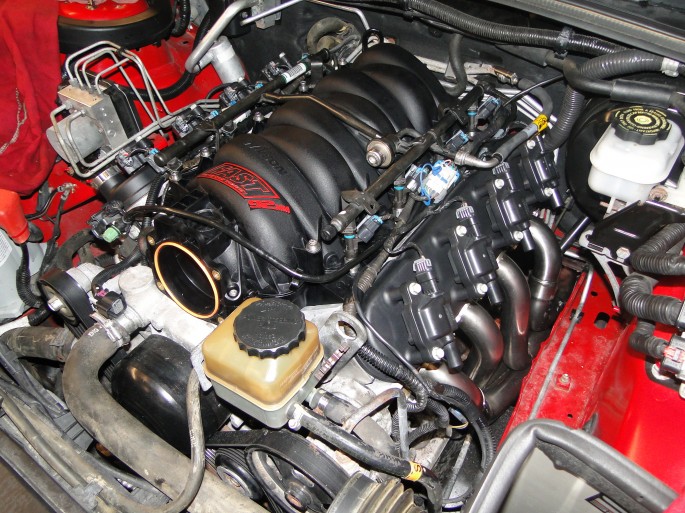 To get rid of the spent gasses, Dynatech Headers and Mid Pipes were installed. They fit like a glove, and won’t have you cussing at the car, while providing the flow that only a true long tube header can. Once the exhaust was finished up, the Wally’s World GTO was ready to get strapped to the dyno over at Raymond Norris Performance for a good tune and big power numbers. 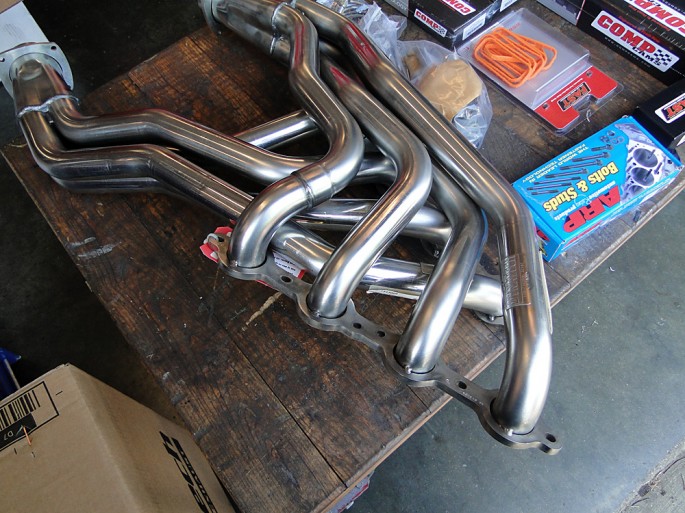 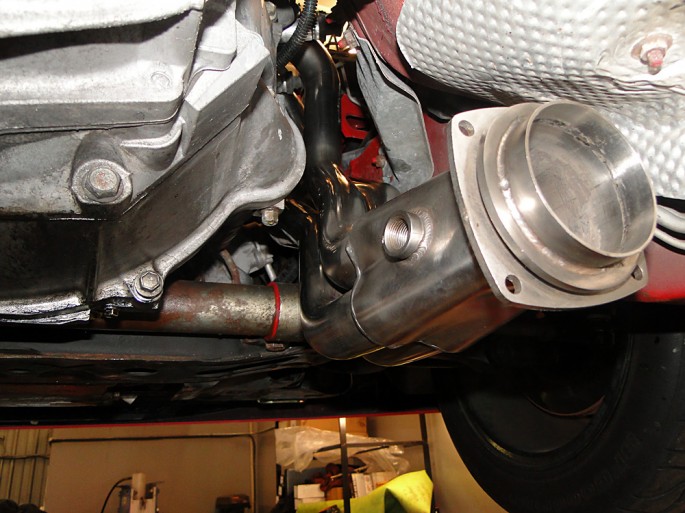 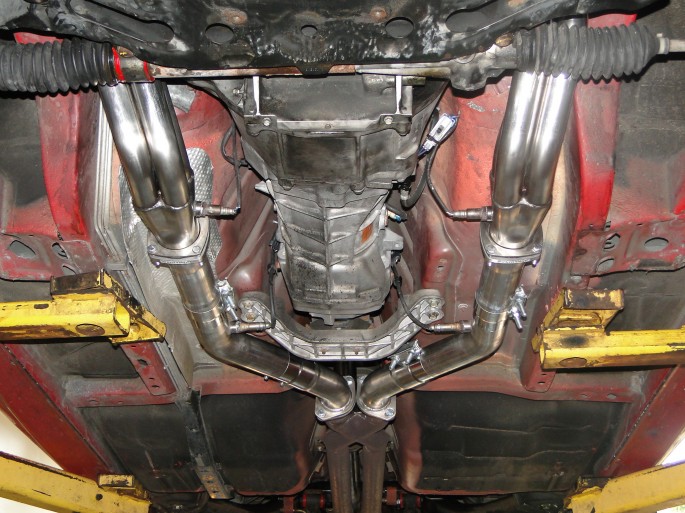 The Wally’s World GTO already had a full Magnaflow exhaust system on it that sounded great and flowed nice, so instead of replacing perfectly good parts, Wally chose to keep the exhaust and mount a couple of electric cutouts in the system for when he’s feeling like a rowdy 16 year old again. 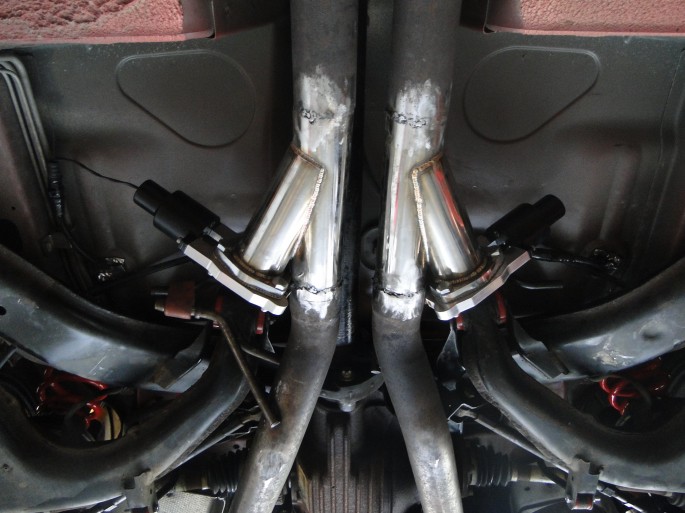 This little GTO went from making 333 horsepower and 330 pound feet of torque to 452 and 438 respectively. That’s 119 horsepower and 108 foot pounds with cam and valvetrain parts from COMP, a FAST intake, and full length headers and H-pipe from Dynatech all taking advantage of some great porting work by Land Speed Development. In the grand scheme of things, this is some easy stuff to do right here. Other than the cylinder head porting, none of it requires anything more than standard hand tools, and when it’s all said and done you can realize huge power gains. More than 100 horsepower, and 100 pound feet of torque, is an improvement you are going to feel in the seat of your pants AND see with results on the racetrack as well.

Click play to watch video of the newfound power on the dyno at Raymond Norris Performance, as Bruce and Mike did a great job with the tune.

We’ll be in Wisconsin at Road America in about 10 days and are looking forward to testing out the newfound power in the Wally’s World GTO ourselves. Stay tuned!