Small Block VS LS: Which 383 Reigns Supreme, Mild And Modded 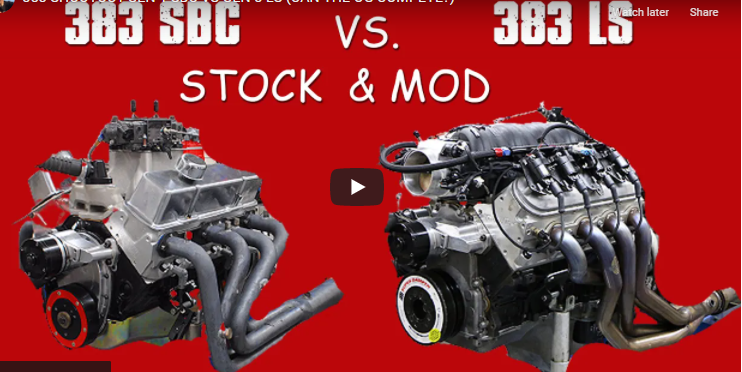 The 383 stroker is one of the most iconic hot rod small block Chevrolet combos ever. When they first became popular, everyone wanted one and 3.75 inch stroke 400 small block cranks were being gobbled up like mad. Then the aftermarket went nuts and before too long you could buy complete stroker combos for hundreds of dollars. Not thousands, hundreds. Cast, forged, billet, you name it, all the parts and pieces are made available and still are today. There was no reason to build a 350 anymore, at least not if the crank needed anything more than a polish, or you were racing in a series that had a cubic inch limit. But then the LS came out, and changed it all again.

Of course the first LS engines were 5.7 liters, or 350 cubic inches, which in all honesty was just a marketing tool to keep people comfortable because the size stayed the same even though the engine was completely different. Those 5.7 LS1 engines had a bore of 3.898 and a stroke of 3.622 compared to a 4 inch bore and 3.48 inch stroke in a traditional small-block 350. To make a 383 stroker LS, which utilizes a 3.905 bore and a 4 inch stroke, you either need to hone an LS1 just a touch, or take a 5.3 and bore it out .125. We’ve done this on a few occasions, and I can tell you that they make a stout stroker combo for a street engine. But I’ve seen plenty of stout 383 stroker traditional small blocks making the same power.

So which is better? The LS or the traditional Small Block? In this video maybe you’ll get that answered.

Here is the info from the video description:

383 VS 383-CAN A MODIFIED 383 SBC MAKE 383 LS POWER? CHECK OUT THIS VIDEO WHERE I FIRST COMPARED STOCK JUNKYARD SBC AND LS MOTORS, THEN MODIFIED 383 VERSIONS OF EACH. EVEN WITH AFTER MAREKT HEADS, WILD CAM TMING AND A HIGH-RISE INTAKE, CAN THE ORIGINAL SMALL BLOCK STROKER COMPETE WITH A STROKER LS? IT’S STOCK VS STOCK AND STROKER VS STROKER UP IN HERE!

2 thoughts on “Small Block VS LS: Which 383 Reigns Supreme, Mild And Modded”