That’s What It Is All About: Gearheads Cruise Past The Home Of A Dying Car Fan After He Couldn’t Attend A Car Show 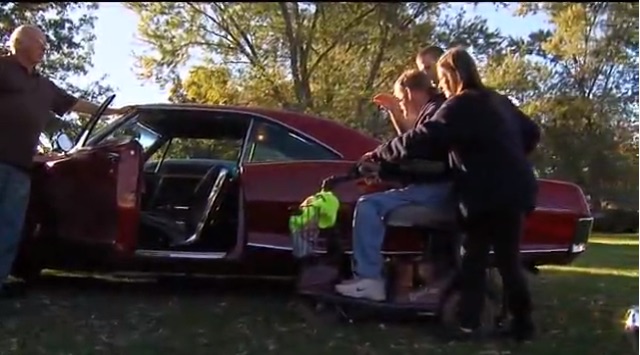 If you knew that your time alive on Earth was winding down to days and hours, what would your last request be? For sixty year old Dennis Hake of Niles, Ohio, the answer was simple: he wanted to attend one last car show with his wife and sons. But suffering from dementia and Parkinson’s disease among other issues, the question was whether or not he would be able to attend a show. He attempted to attend a nearby show earlier this summer, but the hot weather affected his ability to breathe. His caretaker, April Caruso-Richards, knew how much attending the car show with his family would mean to all of them, but with his reduced ability to travel, she decided that if he couldn’t be brought to the cars, that the cars could be brought to him. Caruso-Richards posted her request online for cars to come cruising by Hake’s house, with the expectation of just a few cars rolling by. Instead, on October 11th, 2015, hundreds of cars travelled from hundreds of miles to roll by the house, fulfilling the last wish of a man and his family. According to cruise participants, the entire event was organized by word-of-mouth.

Sometimes, an event happens that can actually restore some faith in humanity, even for a cynic. This cruise was just a small thing that anyone could do for a man they probably did not know, but it meant everything to the Hake family.

Ride Along In A Literal Crapbox As Matt Farah Tests Out A Beater-riffic Nissan Crossover From The 1990s You've Forgotten 2015 Olcott Beach Car Show: Cool Cars, A Great Location, Lots Of Photos!

9 thoughts on “That’s What It Is All About: Gearheads Cruise Past The Home Of A Dying Car Fan After He Couldn’t Attend A Car Show”