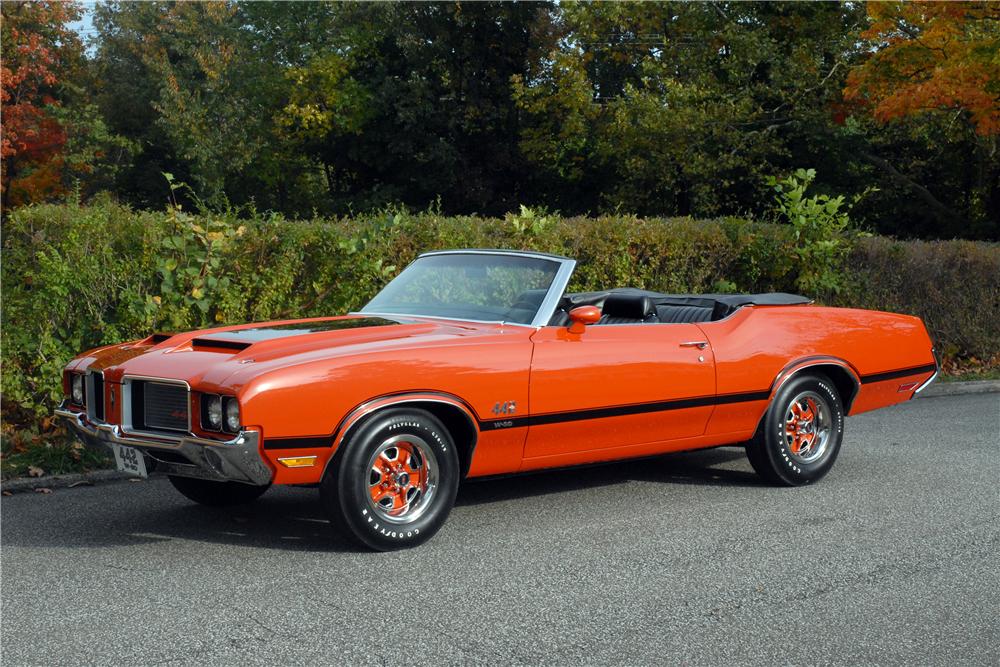 Last week I did the Top 11 Cars from the year I was born, which was 1972, and while a ton of you agreed with me, there were just as many who raised their hands via the comments, email, PM, text message, or homing pigeon to tell me I was a complete idiot and forgot some good ones. Well, I don’t necessarily agree or disagree with all of you, but it was after all just a Top 11, not Top 22, so I went with what motivated me. With that in mind, I did tell all of you that I would put together the “Top 11 Cars You Thought Should Have Been On Chad’s Top 11 From 1972, But Weren’t” and I’m staying true to my word. Some of them will be obvious, and some that you guys sent me won’t be on this list because they actually fall under other Top 11 from 1972 lists that I’m putting together for later. Since 1972 was soooooo much better a year for cool cars than either Brian’s birth year of 1980 or Nutting’s 1984, it might seem unfair to compare mine to them, but I did anyway. If you missed my first list, shame on you, but since we are the internet we can help you out and let you look at it again. CLICK HERE TO SEE CHAD’S ORIGINAL TOP 11 CARS FROM 1972 so you don’t feel left out.

If you still think this list is lacking, don’t be shy and let me know by commenting at the bottom of the page. We appreciate your opinion, even if we don’t always agree with it.

Here is The Top 11 Cars You Thought Should Have Been On Chad’s Top 11 From 1972, But Weren’t, in no particular order. 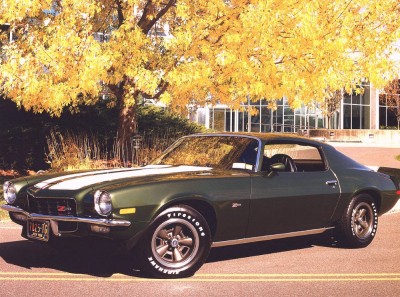 Hey, we picked an F-Body, it was just the Firebird/Trans Am. Sorry. The truth is we’d build a Second Gen Camaro in a heartbeat, but going strictly by what was offered from the factory we had to give the nod to the Pontiac. It just had a little more styling and a cooler power combo. I’ve never owned a Second Gen F-Body, and being the Camaro guy around here I can say that when I do it will most likely be the Camaro. Or at least the first one will be. 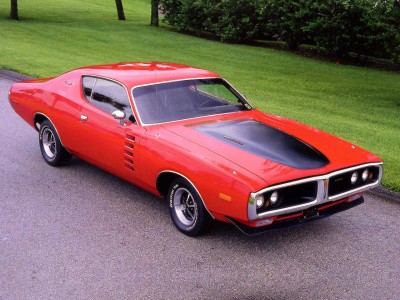 As I left this one off the original list I could hear Freiburger’s voice in the back of my head saying “Your opinion is wrong!” since he loves these things. I like Chargers, but this body style just doesn’t do it for me EXCEPT in NASCAR trim. Still, there were a few of you who said I was an idiot for not choosing to include it in the original list. It’s not the only Mopar that I was told to add, but it’s the one I care the least about. Like the Chevelle’s of 1972 it’s kinda fat, so it’s lack of great power doesn’t excite me when combined with what I think has to be one of the least exciting noses on the planet. Oh well, you guys can have your opinion, even if it’s wrong. LOL 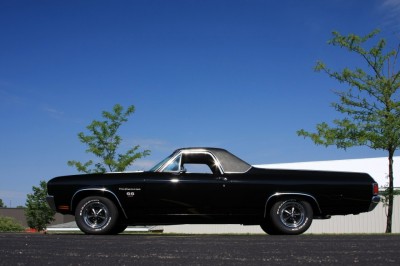 Some of my buddies from high school bitched at me about this one, and I have to tell you I originally thought about including them as part of my Chevelle pick, but they really are different. I’m a huge fan of El Caminos, and grew up with a 1965 El Camino daily driver and tow vehicle. I have friends who seem to have the magic touch with these later El Caminos and always make them look like a billion bucks, so I do like them, there just wasn’t room on the list. And since you could still get a big block in one in 1972, they are probably one of the cars I most struggled with not including before. 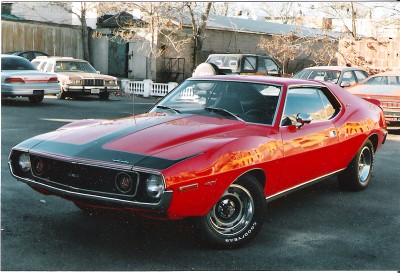 BangShifters Mr. Horsepower, 60Apache, Whelk and Anthony Castillo all said the 1972 Javelin AMX should be on the list. I can’t get behind this one much, because I just am not a fan of the Javelin that this AMX was built on, but I do give it credit for 401 power and a last ditch effort to keep the AMX brand alive. I love earlier AMXs, but like the Charger these just look fat and weird to me. But, you said it should be on my list so it’s on this one now. 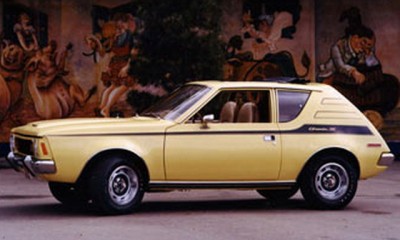 Several of you sent me messages, or made comments, about the fact that I included a Pinto, Maverick, and Vega but somehow didn’t include the Gremlin. Trust me, I have a soft spot for Gremlins, so I did think about it. The Gremlin X was a cool looking appearance package for sure, but with the largest engine available being a 304 cubic inch, 150 horsepower “beast”, it wasn’t much on the road. Sure, the ads said they would spin the tires at will, but it was no barn burner. A Hemi won’t fit in one without SERIOUS hacking, ask me how I know, but man that would be a cool combo. I would like to throw one together with a built 401 with a turbo or something. Somebody else do it first though, because I will never get to it. 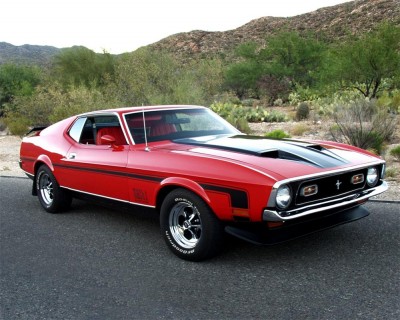 The coolest part about this is the fact that not a single reader said I should have put the Mustang on the list. Not one of you. So why am I including it now? Because Brian does think it should be on the list. As I am fond of telling him whenever possible, he’s wrong. I just don’t like the big Mustangs. I have friends with seriously fast ones that are awesome cars, but I couldn’t do one for myself. And with the most powerful engine being the same 351 Windsors found in the Torino, we would rather have the looks of the Torino. Especially when you consider that the “big” Torino only weighed 175lbs more than the Mustang, I’ll take it. 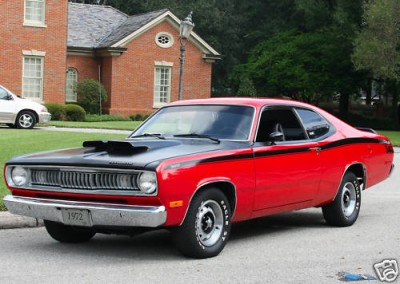 BangShifters Matt Cramer, 75 Duster, and Scott Liggett were just a few of you that pointed out the 1972 Duster and/or Demon 340 cars. I got a ton of hate mail for not including one of these, and I’ll admit it was one I struggled with on the original list. I’m a die hard Chevy guy, but this is one Mopar I would definitely own. In NHRA Stock Eliminator trim this combo is KILLER. 5 years ago it was even better, before NHRA factored the 340 combo to a higher horsepower level. Still, this combo flat flies thanks to ultra light weight and the high revving 340. Plus, it’s the Mopar Nova, and I’m a Nova fan so how could I not love it. Let the flaming begin. 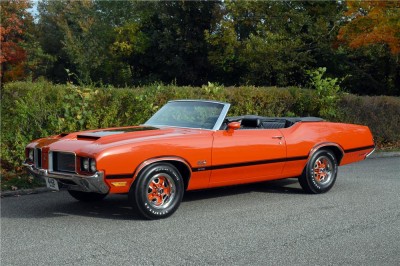 I am a big fan of the Buick and Olds GM A-bodies. I’ve only owned two vehicles in my life that weren’t Chevrolet’s, and one of them was a Buick Skylark. I put the Buick GSX on my original list because of that. The Olds Cutlass and 442 are right there with it, but I just couldn’t put three GM A-bodies on my list. So, the 442 had to wait, but the wait is now over. The 442 was available in 1972 and included heavy duty suspension, bigger wheels and tires, and some graphics. Stepping up the W30 package got you the 300 horsepower 455, dual exhaust, posi, heavy duty cooling, fiberglass hood, and more. It was worth the price, but these cars are now super rare because not even 1000 were made. 66C10 told us we needed this one on the list, and he was right. I may have choked by not including it on the original. 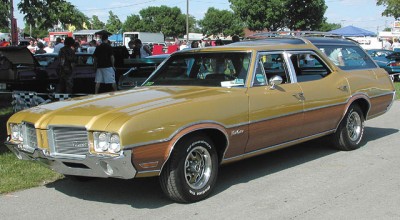 You guys know how much I love station wagons, and this is the wagon that started it all for me. I’ve never owned one, but going to the Goodguys show in Pleasanton always made me drool when I would see one with some tire under it and a lowering job. They are extra cool because of the “skylight” windows on the roof, and the available 455 Rocket under the hood. I will own one someday.

CudaDan and Scott Liggett were not alone when they said I should have included this one, as I think this may have been the most mentioned car that was not on my list. CudaDan mentioned 440, 4-speed, Pistol Grip, and High Impact colors in his comment, all of which were available on the Roadrunner GTX in 1972. A ton of you that emailed me and said that I should have included it also mentioned High Impact colors, unfortunately for all of you that were specific on what those colors were, were wrong. In 1972 the only High Impact color available from Mopar was Lemon Twist, or Top Banana if it was a Dodge. Technically Hemi Orange was still available, but was called Tor Red for most of Mopars offerings. Since you couldn’t get the Hemi in anything in 1972 due to it’s inability to pass emissions, I think you suck if you bought a Hemi Orange car that didn’t have a Hemi in it. Just saying. I do like the Roadrunner A LOT more than the 1972 Charger, because I think that the nose on these cars is actually pretty cool. With the only 440 available having a 4 barrel instead of the Six Pac we all know and love, it would have had to be changed for me to love it, but change it I would.

I only had a couple guys mention this one, and although it is a cool car it’s not as good looking as the Cuda, but with all the same stuff under it. Sorry Challenger guys, it still didn’t make the list.

Despite knowing guys that have these, and thinking they are cool, they just aren’t my favorite. Only Jim Andrews sent an email to me saying it should be on the list. Sharon Voelkel from Ridetech would also tell me it’s cool, even though she’s selling her Convertible at Barrett-Jackson this weekend.

This one was only mentioned by 440 6Pac who said that even though it sucks it will blow the Vega into the weeds. The 4 door doesn’t do much for me, although I could see it being made cool. The wagon on the other hand is ultra bitchin and I would own it for sure. With that said, this car was built in Europe as a Hillman and then sent here to be sold in the US under the Plymouth name. Not necessarily a good thing.

That concludes this list. More are to come. If you have suggestions on what I’m still missing, or what I should include on my “little car”, sports car, truck, and cruisers lists, bring them on. Just add them in the comments below.

Bangshift Question Of The Day: The 2015 Z06, Love It Or Hate It? Watch Dennis Anderson Freestyle The King Sling On Three Wheels After One Falls Off - This Man Is Our Kind Of Lunatic