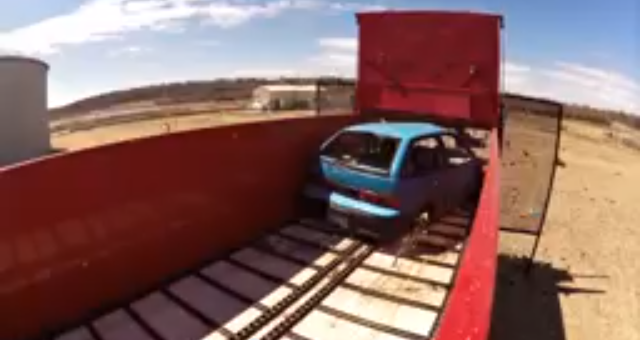 Ah, the manure spreader. It doesn’t lead a glorious life. It spends every second of it’s life either taking crap, giving crap, being filled with crap, or reeking of crap. That’s a lot of crap to put up with, so if there is ever a moment for the lowly manure spreader to rise to fame and fortune, this is it.

This particular spreader, the CB1200, is made by Artex and looks less like a spreader and more like what we expect the entryway to Hell to look like. This beast is capable of flinging cow dung all over thanks to two augers hooked to two 250hp motors. Otherwords, this 500hp blender does a damn good job of mauling through 1125 cubic feet of manure…or, as the video below shows, the picked remains of a Geo Metro.

The scary part is how fast the Metro is actually eaten. A few years ago I saw video of a shredding device that took a couple of minutes to shred apart a 1980’s Dodge Daytona. This thing spits the Metro out in little tin shards in a matter of a second or two. No shit.

Click the video below to watch a Geo get sprayed all over a field!

We've Never Seen Jeeps Do Burnouts Like These, But The Proof Is In The Video! 2014 Holley National Hot Rod Reunion Feature Car: 1967 Dodge D100 Gasser

3 thoughts on “Carnage Video: Watch a Geo Metro Get Turned Into Farm Fertilizer!”