Check Out The Drone Footage And More Of The Cars Being Removed From The Golden Ray Cargo Ship That Sank! 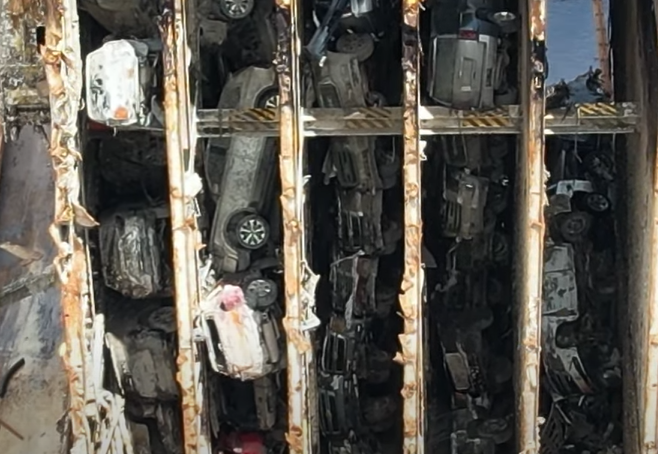 When the Golden Ray cargo ship sank, there were more than 4,000 cars on board. When it came to rest it was on it’s side so all the floors of the cargo ship were now sideways. This meant that all the cars and trucks inside found themselves wedged into the tight spaces or stacked on top of each other on their sides. The footage from the recovery of the ship, including cutting it into multiple sections, was truly spectacular and showed just what is possible in marine salvage now. But one thing that remains interesting and unusual is that they have never righted the ship. None of the sections that were cut off the ship and raised were turned right side up. They still remain on their side.

This makes things look very weird, but it sure is entertaining. And now they are removing the cars from the sections of the ship, which is what this video is all about. You’ll see all kinds of footage in this one, including drone footage that shows cars and trucks piled up and looking like old toys. While there are some cars that look relatively normal, others are very rust or completely covered in dirt and mud. All of them are scrap. It’s weird, and sad, and strange. But you have to watch it to see what we are talking about.

Crazy Tractor Pulling Carnage: Mini Rod Tractor Pullers Giving It Their All, And Then Some! The Crawler Hauler Project Is Getting All Kinds Of Updates! Second Story Deck, Covered Porch, Fire Pit, And More!