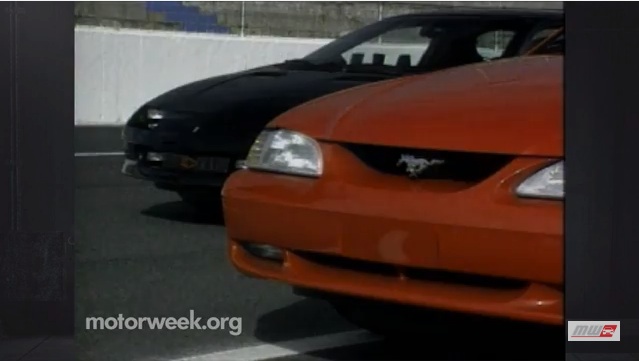 Welcome to my “dammit, I’m getting old” moment, right here. In 1994 I was eleven years old, one year away from the rot-box Camaro that would be my first car, and happily tooling around on a Honda Z50A Mini-Trail, learning the ropes on what would be my first major dive into motorsports…and the source of a lot of my broken bones. The Camaro had just been redone and I loved it…it looked aerodynamic, fast, and they made a great sound. And 275 horsepower! Sure, the skip-shift program really screwed with the six-speed manual, but I didn’t care, I liked it. I would like it with an automatic too, as I learned later in life.

But Ford had an answer for 1994, the SN-95 Mustang. How many of you remember the ads where they compared a silver 1994 to a silver 1964 to show how similar the two cars were? They weren’t…not even close. The 1994 Mustang had more in common with the 1993 Mustang than anything else, but at least the 5.0L V8 was still in the engine bay. It was a heavily reworked Fox-body that was trying to merge into the 1990s design language in the best possible way. The styling was a bit iffy, but if you ever saw John Coletti’s Boss Mustang, with the Larry Shinoda stripes and the gigantic hammer under the hood…woof. Yes please.

These were the cars to dream of if you were a young gear head…so how did they hold up after all of this time? Well, I don’t fit well in either generation, but my nod still goes to the F-car. It had the power, it made the right noise, and when all else fails…T-tops. What is really interesting is this is, in my mind anyways, is the genesis for the start of the power escalation. You could look back to the 1980s, but 1993 saw new bodies, new engines, and renewed rivalry. While GM dominated the Mustang for the most part in the decade, such cars as the 1993 and 1995 Cobra Rs were salvos that there were elements within Ford that were more than happy to go to war with the F-twins. Nowadays these are decently priced used cars that can be fun, but back in 1994 this was the top of the class.

Junkyard Wide Body Mustang: It's Creative, And Kinda Cool, And You Can Do It Too! 2020 Southeastern Chevy/GMC Truck Nationals: Bring Out Your Bowties!