Crazed Video: A Motorcycle Racer Drags His Knee and Then His Head Without Crashing! 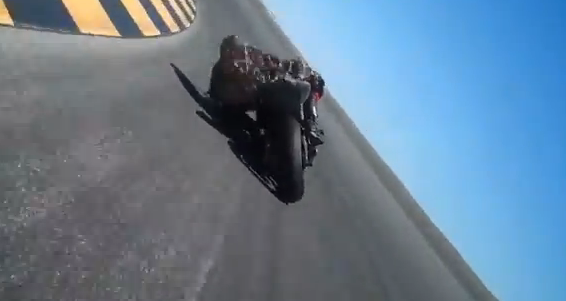 We know jack squat about motorcycle road racing other than what we have observed on television. Our in-depth analysis is that the machines defy all logic with their ability to lay nearly flat and maintain grip of the course and that the riders are all a band of escaped mental patients who are allowed a few hours of release from their straight jackets and choose to use that time at the race track. This video proves both of those points.

You’ll see two bikes really getting after it on an unnamed road course. Each rider is riding hard into the turns and rolling all the way into the throttle out of them. The lead rider is getting the bike low and dragging his knee around the corners, but with each sucessive one he gets lower and lower to the point that he literally drags his helmet on aspahlt through one of the last bends.

By all rights the bike should have washed out from under him, but it didn’t! WILD STUFF!

The Parting Shift: Studebaker Drag Racing Edition Question of the Day: Have You Ever Owned a Car You Wanted to Set on Fire Out of Frustration?

5 thoughts on “Crazed Video: A Motorcycle Racer Drags His Knee and Then His Head Without Crashing!”