Fred Williams Gets To Take A Brand-New Toyota Tundra TRD Pro On An Off-Roading Road Trip Vacation That Anyone Can Do! 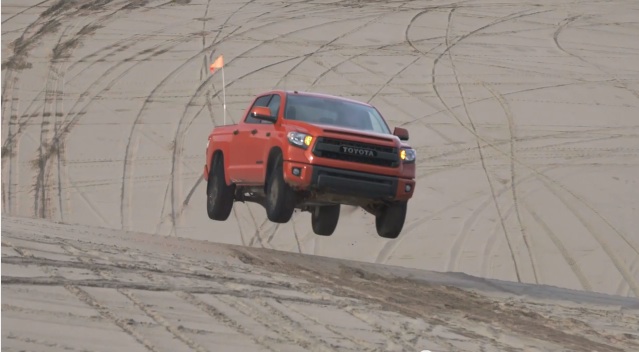 Ok, so you might not get the keys to a $44,000 Toyota Tundra TRD Pro to tool around in, and yes, this episode of Dirt Every Day is mostly a Toyota advertisement. Fine, but if it is going to be an advertisement for a new truck, shouldn’t you at least see what that vehicle is really made out of? Fred Williams would, too, and went out of his way to test Toyota’s new full-size off-road-package pickup by taking it from the southern tip of Texas at the Gulf of Mexico to Neah Bay, Washington, the most northwestern spot in the lower 48 states, and in between he runs the truck through it’s paces. You won’t hear much about fuel economy or on-road driving ability. What you will see is Fred jumping the Tundra in the dunes of Idaho, running the big truck up Hell’s Revenge at Moab, and having a blast along some Oregon fire roads. What you should really get out of this episode of Dirt Every Day is that a road trip vacation is an awesome way to get out and experience some new and cool things. Look at Pie Town, New Mexico, or the tour of the Toyota plant in Texas…there’s plenty of cool things to see and do, so go out there and do them!

All In The Family: If You Think The 15-year-old Can Drift, You Ought To See The 11-Year-Old! Watch This NASCAR Small Block Get Pulled Six Times In A Row To 9,700 RPM As A Race Simulation

3 thoughts on “Fred Williams Gets To Take A Brand-New Toyota Tundra TRD Pro On An Off-Roading Road Trip Vacation That Anyone Can Do!”