Gonna Feel That In The Morning: Watch As Brett Ghedina’s Honda CBR Drag Bike Launches Into The Sky! 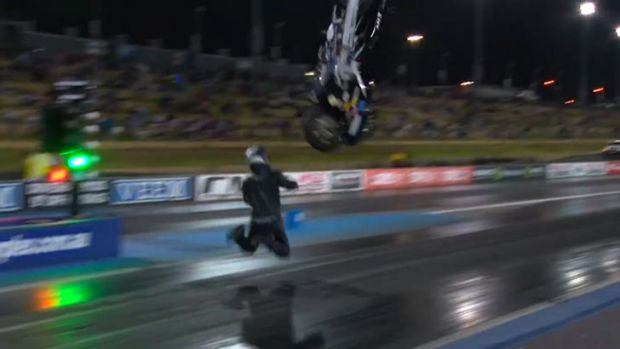 Count Brett Ghedina’s wild ride at the Maximum Thrust Grand Final race at Perth Motorplex in Kwinana, Australia as quite possibly the shortest drag bike run in history. Ghedina was preparing for launch when the boost controller for the supercharged Honda CBR suffered a malfunction. Said malfunction caused the engine to go straight into maximum-attack mode, offering up everything the powerplant had to offer. Extended swing arm or not, any motorcycle, let alone a Comp Bike-spec machine, will have one hell of a take-off once the clutch is dumped, but Ghedina’s Honda literally launched, straight up into the air in a power somersault before returning to Earth. When asked about what happened, Ghedina replied, “That’s not what it’s supposed to do.” No, Brett, that’s exactly what it’s supposed to do when the boost is set to “kill” without your permission and with no wheelie bar to save your bacon!

Gearhead History Americana: More Photos Of Machines, Factories, Cars, Trucks, and More From The Past Office In The Sky: This 1960s United Airlines Pilot Recruitment Film Is Really Cool