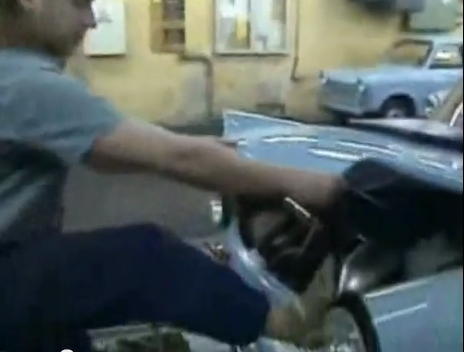 The Trabant is an awful little car that normally heads anyone’s list of the worst cars ever built. The little East German wonder was produced for more than 30 years with virtually no upgrades, changes, or alterations. As you will see in this video, the build quality was totally heinous, the cars were flimsy as hell, and their actual construction was a literal joke. We have no idea why this video was being made and we can only assume it was for some promotional film or news story. The film shows a Trabant at the end of the production line and workers performing the final QC checks and “adjustments” that the vehicles were subjected to before being delivered to their new owners. It is beyond awesome.

The first precision artist we see is making some under hood checks, tightening bolts, and then starts to work on the hood fitment. When things aren’t lined up quite right he proceeds to kick the radiator support in and then bend it out by hand to get the hood properly aligned. He’s slamming the daylights out of the thing and after a couple of minutes to gets the fit “right”. Lord knows what happened after the owner opened it again.

The second dude is the best as the repeatedly slams, bends, hits, and wrenches on the door of the car he is working on to get the fit correct. Our man has a wooden block that he uses to deftly mash the door into the right position. We also delighted in his skilled use of a hammer, his palm, and his leg in the door fitment operation. His work on the hood is all time, as well.