Historical Footage: Ford’s Battle Tactics For Dealing With The 1965 Corvair…These Guys Were Going For The Throat!

Oct 19, 2020Bryan McTaggartFORD, HISTORIC, VideosComments Off on Historical Footage: Ford’s Battle Tactics For Dealing With The 1965 Corvair…These Guys Were Going For The Throat! 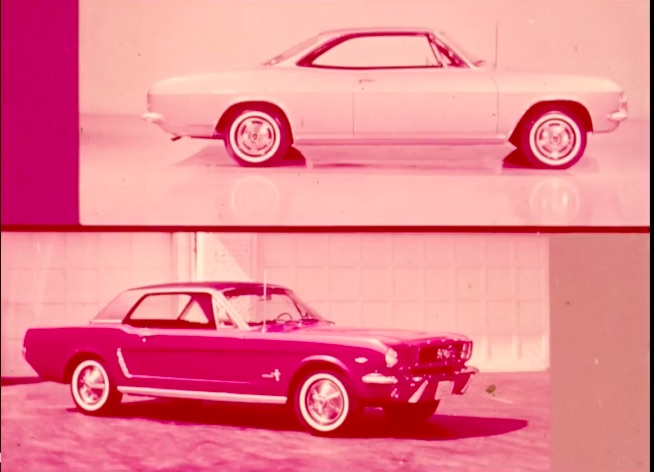 By the time the second-generation Corvair was being prepared for sale, Ford’s Mustang had proven to be a runaway hit of historical proportions. General Motors knew just how deep in trouble they were in when Ford managed to move over eighty thousand Mustangs in just 100 days…suddenly, executives who had been rather dismissive of Ford’s in-between pony car realized that they had mis-guessed and were ready to make a move, any move, to start pecking away at the Mustang’s sales numbers. While GM was working on two projects that would truly fix Ford’s little red wagon, the “Panther” project that became the F-car twins and the XP-833 concept of 1964 that would flavor Pontiac’s variation, the Firebird, a stop-gap move was needed. The re-skinned Corvair, complete with a handsome hardtop two-door body shape, a turbocharged six-cylinder, all-new independent suspension design that eliminated the “interesting” handling characteristics of the first generation, and no attention from one certain political crusader yet, was to be that stop-gap move.

Normally, in comparison videos from this era, manufacturers obviously favor their own cars, but tend to at least be semi-fair or even complementary about the rival car they’ve chosen. Ford did not even try in this regard…they go after the Corvair with all of the joy of a wolf that has found a fat rabbit in a snare trap, and with all of the mercy involved in the same situation. 1967 was just a couple of years away and Ford wasn’t seeing the Camaro or Firebird on the horizon yet! We aren’t for sure, but we are willing to bet that the explanation that Chevrolet executives gave the automotive press about what a Camaro was (“a small, vicious animal that eats Mustangs”) might have had something to do with this film?