Historical Footage: The 1970 American Motors Model Lineup Commercial – “What Would You Do?” 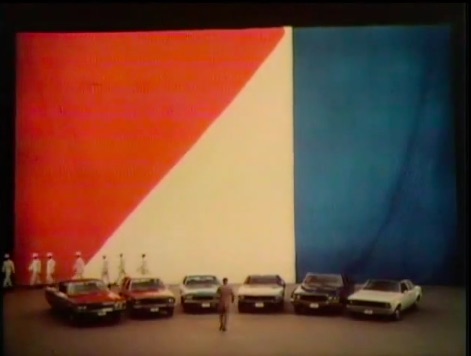 This wasn’t a swipe at the famous speech from the movie “Patton”, now was it? You can’t blame American Motors for reaching to whatever length they felt they needed in order to claw some more sales away from the Big Three…even though 1970 was right at the high point for the newly unitized American Motors, the company on the whole was only a percentage of what Ford, GM and Chrysler were raking in and they knew it. It was a good year for AMC, though: the Hornet, the car that would see AMC through to the end under various model names, debuted, as did the Gremlin subcompact which would hang around for a good deal of time itself. The AMX and Javelin were the surprise hits of the company for musclecars, the intermediate Rebel was enjoying one last year before being re-named, and the Ambassador full-size was in it’s second year, having just come off of a re-design for 1969. What’s noticeably absent from the commercial are the Jeep products…that deal had been done in February 1970, and AMC was working hard behind the scenes to repower Jeeps from GM-sourced engines and legacy mills from Kaiser. The pitchman, actor Kevin McCarthy, puts one a hell of a show, but the scene stealers are the guys pushing AMC products around in the background. Hindsight being 20/20, pushing cars into view doesn’t exactly inspire confidence in the product you are trying to sell.

The American Powertrain Parting Shift: Meet America's Most Unique Truck - The Three Trans Equipped Holy Smokes! Check This Out: A Visual Timeline Of The Build Of This Mustang/Integra Mashup!

3 thoughts on “Historical Footage: The 1970 American Motors Model Lineup Commercial – “What Would You Do?””