How Much Nitrous Can A 305 Chevy Take Before Things Go Bad? Engine Masters Finds Out! 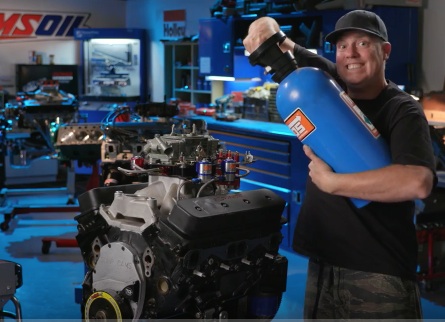 The 305 Chevrolet V8…it’s not the Rodney Dangerfield of small-block Chevrolets (that honor goes to the 307) but it still has a big issue with reputation. Mostly because it’s synonymous with “smog motor”. Practically every rear-wheel-driven GM anything made between the late 1970s and the early 2000s stood a chance of this motor being shoved underhood, usually in dingy black with a myriad of vacuum hoses strewn about and affixed with a horsepower figure that was worthy of sad laughter. That being said, I like the little bastard child for two reasons: the 1987 Monte Carlo SS I had with the L69 “H.O.” mill and the 1973 Chevelle I owned that had a seriously worked over late 1970s era 305 that acted like more like a 383 stroker than it did a smogger lump. They have potential, and by far one of the easiest methods to getting strong performance out of the five-liter Chevy nobody really wants to remember is with the blue bottle of happiness. That’s right, nitrous!

Now, off the bat, you can see that this isn’t a stock smogger lump of a 305. Ran naturally aspirated, it’s cranking out 358 horsepower in the far end of the rev range, and 323 ft/lbs of torque down low. That’s a pretty badass 305 and would make a third-gen Camaro or G-body wake right up. But the plan is that to force-feed this mill as much nitrous as it can tolerate before the engine calls it a day and dies. Take your guesses on how much power it’ll make, and how much squeeze it can take!

5 thoughts on “How Much Nitrous Can A 305 Chevy Take Before Things Go Bad? Engine Masters Finds Out!”