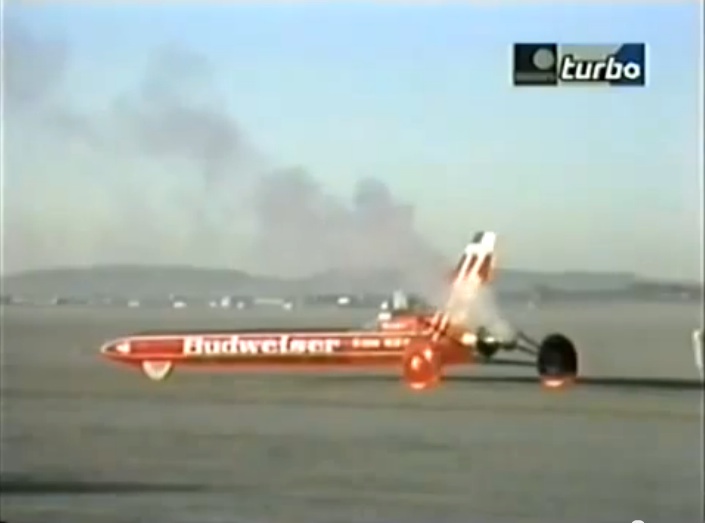 There have always been certain controversies in land speed racing over the years. Many of the early ones have been covered in our awesome Salt Beds of Salduro series which picks up again today, but none of them have ever risen to the level of the Budweiser rocket car that Hal Needham provided the cash for and Stan Barrett provided the balls behind the wheel for. The machine was a three wheeled, terra firma bound missile that used a hybrid liquid and solid fuel rocket along with the rocket engine from a Sidewinder missile for umph. Because the vehicle only had three wheels it was not considered a car by the FIA…or any other land speed racing organization. After testing the car at Bonneville, it was determined that the car would not be able to get up to speed and maintain the speed over the necessary “flying mile” to be timed in the recognized method to have a record certified by the SCTA, FIA, or anyone else. After figuring this out and realizing that it was not a hurdle that they’d be able to overcome, the focus of the project became the mission to make the Budweiser Rocket the first wheeled vehicle to break the sound barrier.

The controversy comes from the fact that Needham, Barrett and everyone else involved with the car claim that it broke the sound barrier at Edwards Ar Force base in 1979. The car was timed using ground radar which was monitored by the Air Force. There are people who will say that the Air Force “certified” this achievement but the reality was that it wasn’t the Air Force itself that certified anything but rather the Air Force guys on the switch the day of the record. As sure of their achievement as Barrett and Needham were, the other is sure that they didn’t break the barrier. There was no reported sonic boom as happened when Andy Green “officially” broke the sound barrier in 1997 and the video does not indicate any differently. We’d suspect that if there were a “boom” it would have been central in all video of that day in the desert. To his dying day, Needham was steadfast in the accomplishment. Our opinion? The lack of the sonic boom seems like pretty damning evidence for the detractors.

That being said, Stan Barrett and the whole crew had a car that ran repeatedly at the 700mph mark and maybe even a little faster than that. We don’t know how many runs at that speed Andy Green made but Stan Barrett is one of a handful of guys to not only achieve the speed that he did make, but did it repeatedly and safely. We’re not running this to bash on the Budweiser car because we very much respect what they did achieve. We’re running it because the video is spectacular and we had never seen it before. Also because we’re still smarting about not being on the salt right now where we should be. Dang!

PRESS PLAY BELOW TO SEE STAN BARRETT SCORCH THE EARTH IN THE BUDWEISER ROCKET CAR IN 1979 – SUPERSONIC? YOU DECIDE