Quick Videos: The Sights Ad Sounds Of Nitro On the Salt At Bonneville Speed Week 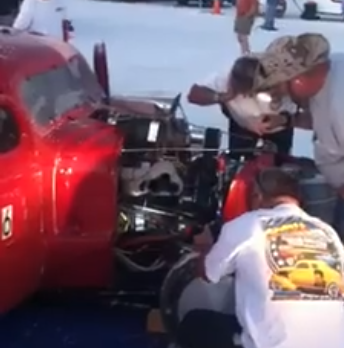 One of the things that really blew me away on the salt was the sheer number of cars running nitro and how much of it they were running. This wasn’t some weak suck 30% load that guys were messing with. Nope, these cars had 80-90+% of the good stuff cursing through their veins for miles on end. In talking to some of the engine builders, less compression and lower revs were two of the basic keys to keeping a nitro motor happy for the long runs down the salt.

During the week, I shot a couple videos with my phone to illustrate the sheer awesomeness of nitro at Bonneville. They aren’t artistic, well shot, thoughtful, or anything else bordering on the pro-level video that is becoming the norm on the web these days. Instead, it is raw and depicts a couple of cool scenes from the week.

The first video is of the FlatCad team tuning their car up in impound one morning. We’re talking about a 350-360ci Cadillac FLATHEAD topped with a big huffer and running a still load of fuel. Listen to this thing cackle away at dawn!

Secondly, here’s a nitro burning lakester coming off the truck and thundering down the salt. No further description needed –

5 thoughts on “Quick Videos: The Sights Ad Sounds Of Nitro On the Salt At Bonneville Speed Week”