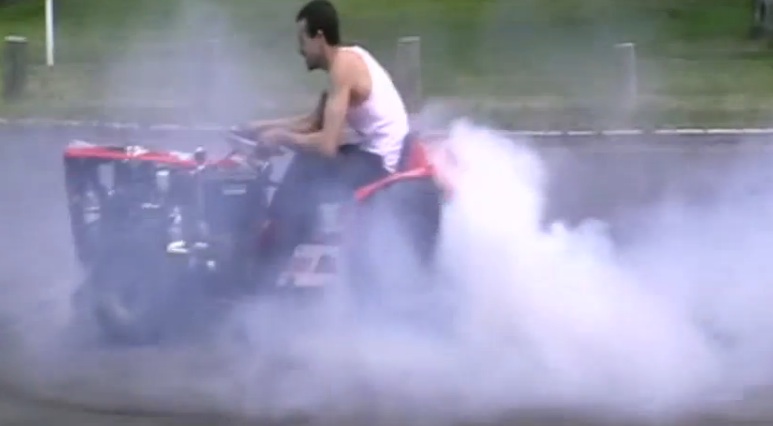 We think this machine was built in Australia because there is some footage of it ripping donuts and burnouts in an Aussie power skid competition nearing the end of the video. We get to see the whole project come together, though. First there’s the little single rotor engine that gets fired up on a pallet, then there’s the tractor on a dyno with its rear tires being spun so hard and fast they look like they’re about to fly off the rims, then there is plenty of burnouts and donuts before some drag race style laps are made on the screaming former piece of lawn equipment.

From the looks of the video, the tractor has a car style manual transmission. You can see the dude on the dyno manipulating the shifter at one point and it certainly looks like something yanked from a car. The rear end looks to be a severely narrowed unit from a Toyota truck. Those pieces are essentially miniature copies of a Ford 9″ and the housing sure looks like the ones we have seen under ‘Yota trucks before. The whole thing makes for a fun combo and you’ll see what it is capable of when various drivers put it through its paces. We think that this tractor would eat the V8 tractors alive, though the complete lack of low end torque that rotaries have gets exhibited even here where the engine is powering something as light as a lawn tractor. The V8s at least have the torque situation handled, but if you were able to get the rotary tractor off the line first and make your shifts, we think it would be untouchable. What do you think?

PRESS PLAY BELOW TO SEE SOME GOOD OLD HORSING AROUND ON A HOMEBUILT ROTARY ENGINE POWERED LAWN TRACTOR!