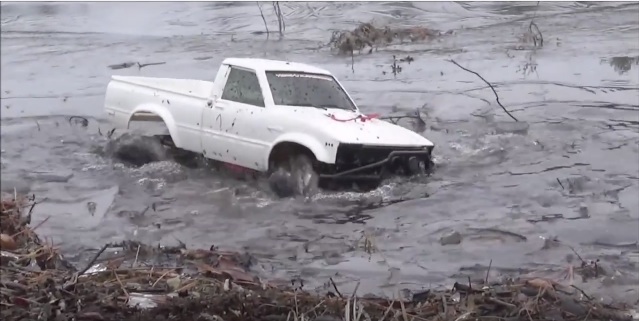 A lesson I learned as a kid playing with electric-powered remote-controlled cars: electrical components plus water and mud equals shortened lifespan of the remote-controlled vehicle…and that didn’t bode well in Western Washington, where I had plenty of water and mud to play in. As an adult, you know why you shouldn’t mistreat these toys…they are damned expensive, for starters…but as a kid into cars, I wanted to see mud being flung around! I wanted action! But even with my immature habits as a kid, there was no way in hell I would try the stunt that this poor remote-controlled Toyota Hilux was subjected to. The Axial SCX10-based truck doesn’t seem to be even remotely bothered by frigid water in the least…and we don’t mean splashing about. We mean driving under the ice layer, completely submerged. That would have straight-up killed any remote controlled vehicle I’ve ever owned, period. The owner says that the vehicle has been properly waterproofed to the best of his ability. His ability is pretty damn good.

3 thoughts on “Best of BS 2016: Remote-Controlled Toyota Hilux Drives Underwater, Under The Ice!”