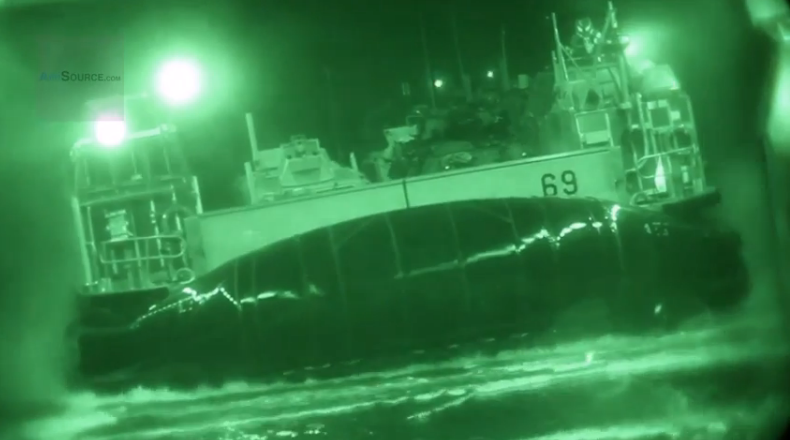 These are called LCACs or Landing Craft Air Cushion in long hand. They are exceptionally awesome machines with the ability to handle a 75-ton payload, the snot to reach speeds of more than 70mph on the right terrain and 40+ mph when fully loaded, they’re bristling with machine guns, and they measure nearly 90ft long and nearly 50ft wide. Did we mention that they have a fuel capacity of 5,000 gallons and burn 1,000 of them per hour when the hammer is down?

These are valuable machines for the Navy and there are plans to keep them in the fleet for a good long time. They can get men, machines, and supplies to shore quicker than virtually any other form of vehicle and as you’ll see in the video they can do it in volume. If I were the bad guys and I saw two of these monsters coming my way full of guys and armored vehicles, it would be time to cut bait and haul ass. Jeff said that the air cushion bags can take some major hits and keep the craft functional, which has got to be an important part of the program, especially when pulling up to an area where folks aren’t exactly happy to see you coming normally.

In this video you’ll see two LCACs depart and then return to the ship where they are based. Watching them pull in and out of their “garage” loaded with equipment is neat especially when you consider the size and power of the vehicles involved. Also, when the LCACs are shown “coming home” it is at night in pretty heavy looking seas. Despite the conditions the pilots manage to drive their craft into the “garage” in drama free fashion.

We’re always thankful to the men and women who serve our country on a daily basis at points far and wide around the globe. Perhaps even moreso on a week like this when the vast majority will be many thousands of miles away from family and friends on Christmas. The LCAC vehicles are damned cool but the men and women you see involved in their operation as well as those you see getting off of them after they are “parked” are the real stars of this show.

PRESS PLAY BELOW TO SEE A PAIR OF HUGE, POWERFUL, AND BAD ASS MARINE LCACs LAUNCH AND RETURN TO THIER MOTHER SHIP!

Gallery: 20 Photos Of Bitchin' Pro Street Cars From the BangShift Photo Archive BangShift Question Of The Day: Who Is The Best American Racecar Driver Ever?