Too Close For Comfort: What It Looks Like When A MD-80 Takes Off Feet Above Your Head!

May 09, 2020Bryan McTaggartRACING & ACTION, VideosComments Off on Too Close For Comfort: What It Looks Like When A MD-80 Takes Off Feet Above Your Head! 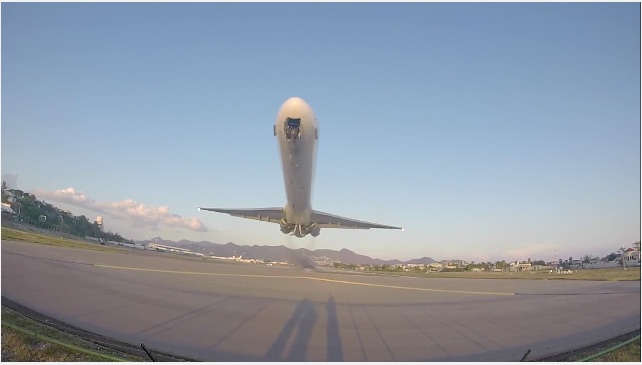 Princess Juliana International Airport in Saint Martin is renowned to planespotters for one of the most dramatic runway approaches in the world, requiring pilots to land within yards of Maho Beach and a road. Over the years, many awesome images and videos of planes as large as Boeing 747s have been filmed, but finding images of aircraft taking off over the water isn’t as common due to the wind patterns over the island. Normally, aircraft start their takeoff roll as close to the beach fence as possible and after sandblasting all of the vacationers who can’t believe the luck they have at how close they can be to an aircraft, climb out over the hills in the distance. But when the winds shift, taking off out over the ocean becomes possible and can provide even more dramatic footage with aircraft clearing the fence at the end of the runway with feet to spare. Case in point: This MD-80 taking off from the airport was filmed by Todd Worthen, who was on vacation from Nova Scotia. Standing at the edge of a runway while a plane that can weigh in at nearly 80 tons hurtles toward you at nearly 170 miles an hour takes some serious stones, but the footage speaks for itself, especially as the airliner makes a graceful climb into the sunset.

Take it from somebody who spent a great deal of time working on live runways…if you think it’s intense as a video, in person it’s a thousand times more efficient at ramping up your heart rate.

The Throwdown In T-Town Is Happening This Weekend!!! Free Tickets Are Available Or Watch The PPV Livestream Classic YouTube: The Torturous Brake Test For An Airbus A380-800's Stopping System