Video: This Bad Ass Video Of Mike Ryan Wrestling His Freightliner Up Pikes Peak Set Our Hearts A Flutter 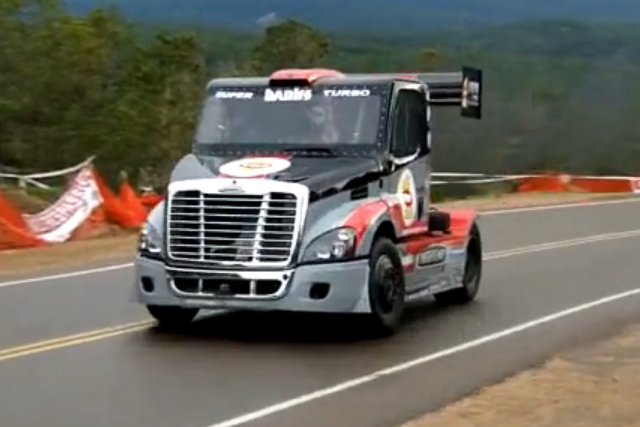 A-flutter you say? You’re damned right a-flutter. What else would watching a huge Freightliner truck powered by a supercharged and turbocharged Gale Banks built mondo diesel flying up the side of a mountain cause our hearts to do? Actually, one time this truck made me openly weep and that was when Chad called me like he had been shot out of a cannon after riding shotgun around a race track in it sideways with the tires smoking. That day my heart ached a little but this video has cured all of that.

Shot from a million different angles with footage taken inside the truck, attached to the truck, from spectators lining the course, and even from helicopter you get the best look yet at what it is like for Mike Ryan to manhandle this thing up the (now) paved Pikes Peak course. Outside of all the cool video of Ryan driving the truck, we were into watching the conditions change on the course as he got up in elevation. On the ground things seemed nice and sunny and dry but as he climbs higher and higher the course is all wet, there’s snow on the sides of the road and visibility is clearly getting less and less. The good news is that no matter the conditions the horrifying sheer cliffs and seemingly endless drop offs were still open for business. Charging into some of these corners takes some serious intestinal fortitude in a car, let alone a darned Freightliner!

Mike has been doing Pikes Peak for years and he’s also conquered Mt Washington in New Hampshire and a bunch of road courses and gymkhana deals around the country. He’s as familiar with this truck as any race car driver is with their mechanical steed. It really is cool to watch him drive it. Other stuff to note comes in the form of how much negative camber is dialed into this bad boy. You can see it in some of the outside footage of the truck. Also, the size of the blower, which can be seen a couple times from a camera angle behind the cab. It looks like the biggest freaking Whipple-charger we have ever seen. The ribbed case had us thinking it was a Whipple, but by all means correct us if we’re wrong. This is a bitchin’ video!

PRESS PLAY TO SEE MIKE RYAN CHEAT PHYSICS AND THE GRIM REAPER WHILE RUNNING UP PIKES PEAK IN UNDER 13 MINUTES!

4 thoughts on “Video: This Bad Ass Video Of Mike Ryan Wrestling His Freightliner Up Pikes Peak Set Our Hearts A Flutter”