VIDEO: This Russian two-wheel drive motorcycle floats, and there’s an amazing surprise at the end 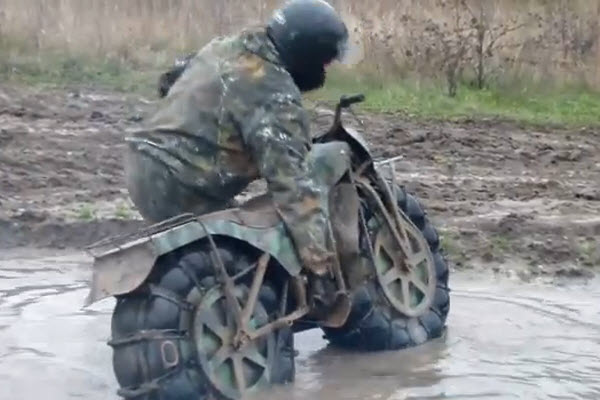 I’ve been a big fan of Rokon Trailbreaker motorcycles for a long time, so when I saw this Russian video, I figured it was just another clip of one of these unique, two-wheel drive American motorcycles in action. But there’s a lot more to say about this incredible bike.

Like the Rokon, this bike is less a “motorcycle” than it is a two-wheeled ATV. They weren’t designed to ride long distances at speed. Rather, they were designed to get people to extremely remote locations where an ordinary dirtbike wouldn’t be able to go.

This one — we’re still trying to figure out what it’s called — features two-wheel drive. Like the Rokon, it looks like it’s operated by a chain drive, that turns the front wheel, which is in turn attached to some kind of a shaft drive mechanism contained in the frame. Also similar to the Rokon, it features high flotation tires that actually allow the motorcycle to float, making it easier to walk this Russian bike across deep water. 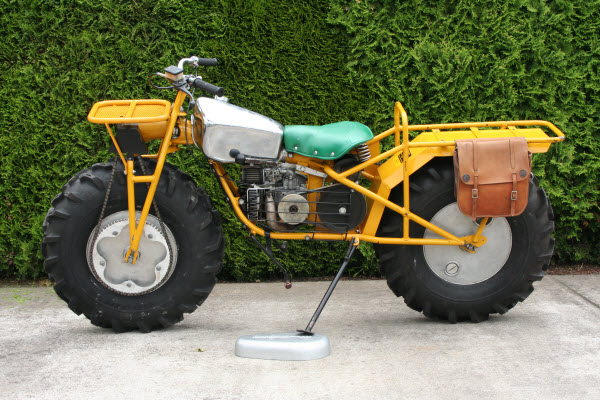 The 1969 Rokon Trailbreaker was built in Wilmington, Vermont, and was clearly a much more robust machine, but the Russian bike has a lot going for it, too. Watch the video to find out.

That’s where the similarities start end, though. Instead of heavy off-road tires on expensive aluminum wheels, the Russian machine looks like it uses a truck inner tube for flotation purposes only, which is protected by a cage of steel straps that also act as paddles in the water. No idea how durable those tubes are as exposed as they seem to be, but it’s a pretty interesting arrangement.

The Rokon is designed to be relatively light, but this bike looks like it can’t weigh more than a hundred pounds or so, the way the rider throws it around. Its frame is made of one-inch square tubing. The body itself looks like it’s made of fiberglass, to keep the machine light. The video shows all kinds of uses, including propping it up against a rock and using it as a ladder. 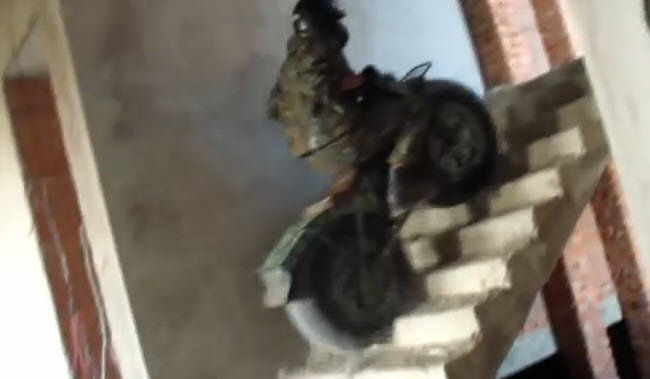 The big surprise happens at 1:55, though. No spoilers here, we’re just telling you that it’s a completely unique feature that the Rokon Trailbreaker doesn’t come close to replicating. Hang in there and watch the whole thing. It’s a pretty amazing little bike.

5 thoughts on “VIDEO: This Russian two-wheel drive motorcycle floats, and there’s an amazing surprise at the end”