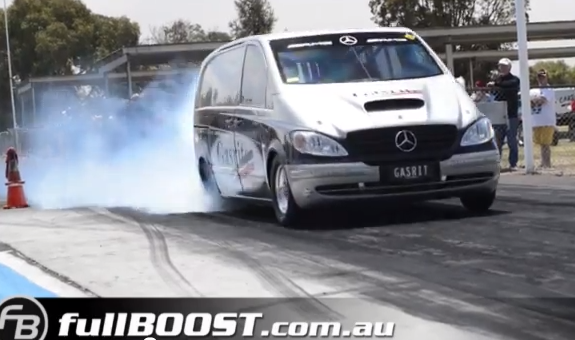 Outlandish drag cars and trucks have long been a part of the fabric of quarter mile competition and it doesn’t matter what part of the world you’re in for that statement to be true. We’ve shown footage of this wild-ass Australian creation before and we’re back with more video today because the weirdly cool van recently smashed its way into the 7s at over 180mph! The guys at the FullBoost.com.au YouTube channel were there to capture the action both inside and outside of the van.

The thing looks like a dreamboat to drive as the pilot doesn’t have to do too much with regard to steering in order to wrangle the van down the course. The engine is a very healthy 632ci big block Chevy that is swallowing a whole lot of nitrous to move that van down the asphalt aisle in less than 8-second and over 180mph. Our guess is that the whole van is made of steel because as best we know, there isn’t anyone making ‘glass or carbon fiber parts for those suckers!

We dig the hell out of this van and the fact that Andrew Bartlett continues to make it quicker and faster. Where will it end? Who knows and who cares! This thing rules.

Press play below to see a weirdly cool Mercedes van drag machine run down the quarter mile in the 7s at over 180mph!

Mini-Feature: A 1957 International Welding Truck That's The Same As It Was When It Left The Job Site Video: The Miniature Slingshot From The Postman Pat Guys Hits The Strip!

3 thoughts on “Video: Watch The Australian Mercedes Plumbing Van Dip Into 7s With A Pissed Off Nitrous Snorting 632 Chevy”