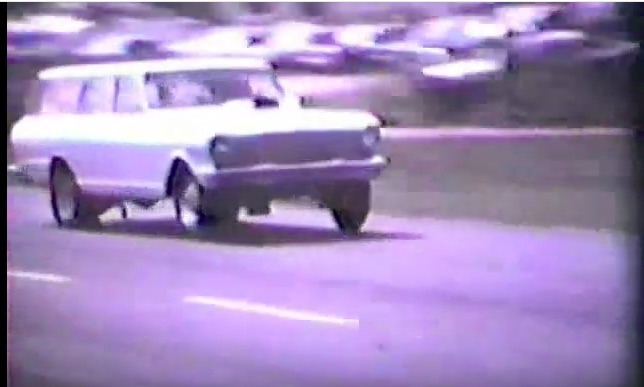 Shuffletown dragway closed in 1991, leaving a gaping hole in the Charlotte, NC area drag racing scene. The track was a quaint place by modern standards, but had the type of historical provenance modern places will never have. It was the scene of big time match racing in the 1960s and one of the stops all the touing pros of the day raced at. The track was also one of the crucibles that bore out the Pro Mod class out of the wild door slammer scene of the late 1980s and early 1990s.

While we do not know what event this was we do that it was an “event”. How? You’ll see some well known cars here. Some guy named Gene Fulton in his white Chevy wagon, gasser heroes like Ohio George Montgomery and Jr. Thompson, lots of bad ass muscle cars, some wheel stands, and more. There’s a cool Opel vs Opel showdown caught in there as well.

This video shows the track in the heyday of both drag racing and its existence. One of the things that always makes us smile about videos like this that we find is the fact that some would go through the trouble to drag their 8mm video camera out to the track and actually take some film of what was going on. Not only that, they would either actively or accidentally preserve it for the guys 40 years in the future to watch and revel in.

We know that there is still tons and tons of this stuff to find in people’s basements and attics across the country so as the years go by we hope that videos like this continue to emerge and we get to live those Saturday and Sunday afternoons at the drags like the guys back in the day did.

Beware, the “soundtrack” is Little Richard singing a raw version of Tooti Fruity. The video is all old 8mm looking stuff with no sound.