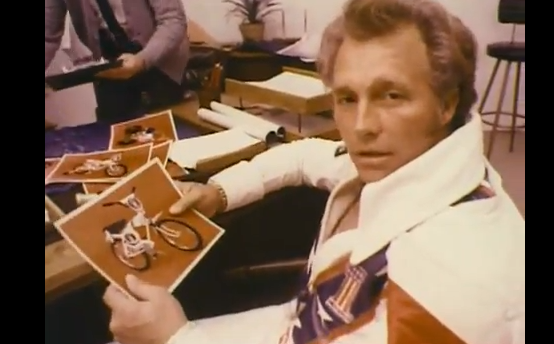 There were few people more famous in the 1970s than the late Evel Knievel. From jumping motorcycles to jumping canyons (Ok…trying to jump canyons) he was known around the world for his feats of daring. He was also known for an ego that needed what was one of the biggest semi-trucks in the world to be transported in, attacking people with baseball bats, and consuming alcohol and pills with ferocity. Did we mention that he was a hell of a pitch man, too? One of the things that Knievel was great at doing was marketing himself and through the 1970s there was virtually every form of Evel branded or themed merchandise one could imagine. From action figures and lunch boxes to bikes, and that brings us to this ad.

AMF is the company that has been in virtually every business from bowling alleys to motorcycles to nuclear reactors (seriously). They had a bicycle division from the early 1950s on and when sales were lagging in the 1970s came up with a great way to spur things on. That way was to add a dose of Evel to their products with Knievel branded bikes and using the man himself to pitch them. They then produced this ad, which is the most fantastically 1970s piece of film making ever created.

Press play below to watch Evel Knievel at the height of his powers in the AMF bike commercial!