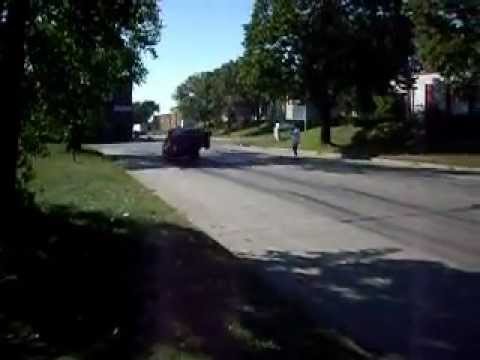 Well, we know at least one guy now who we have to believe when he tells us that his car can pull wheelies on the street and that’s the owner of this Chevy Malibu station wagon! This small tire drag machine hooks hard on the strip as evidenced by his other videos, but that rear suspension is working awesomely on the street too as this crazy ass wheelie shows!

The car has a big block in with with massive twin carbs on top and at least one stage of nitrous. We have no real details on the car other than a couple of notes from the other videos on the YouTube channel this one came from. The chassis has a 25.3 cert and apparently it is a stock suspension class car.

As you’ll see, the wagon elevates right on the hit of the throttle and then lands HARD right in front of the camera. Since the car was moving to the right, it looks like the driver made the right move to dump the throttle and prevent a disaster. Long story short, the car is friggin’ awesome and could apparently hook up in a car wash!

Oh, and don’t try to do this with your car. It breaks about elevendy hundred laws.