Winter Rally Madness: The Action And Carnage From The Jari-Pekka Junior WRC Rally In Finland 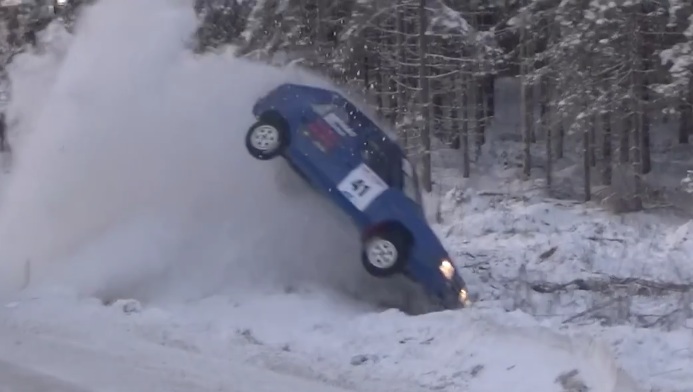 As I type this, snow is dumping on BangShift Mid-West HQ for the third time in two weeks, and just as the last of the second storm had melted off. It’s no secret that I’m not a winter person, mostly because of the cold, but also, as I recently was reminded, because everyone on the roadways scares me. I don’t care if it’s Grandma in her Buick Century or the lifted Cummins Dodge that looks like it could plow through Arctic conditions…I don’t trust anyone’s driving. It’s because of the sincere lack of driver’s training in the U.S. system. Can you operate a car, recognize road signs and not drool on the poor soul who grades your effort? Here’s your driver’s license! In Finland, the process is much more stringent: you don’t even get to start working on your test until you are 18 years old, and it takes two years to get your full license. Keep that in mind as you watch this footage of Finnish Junior WRC rally racing…this class is meant to give drivers that are under 26 the opportunity to make a name for themselves at a reasonable cost. “Reasonable” doesn’t mean that the talent may be present yet, because some of these off-course excursions are enough to make even a seasoned rally crash fan wince a little. You’ll be pleased to know that no driver, co-driver or fan was injured in the process of turning perfectly good rally cars into modern art, and if you notice a similarity between this action and what your town looks like when the cold stuff falls from the sky, stay home.