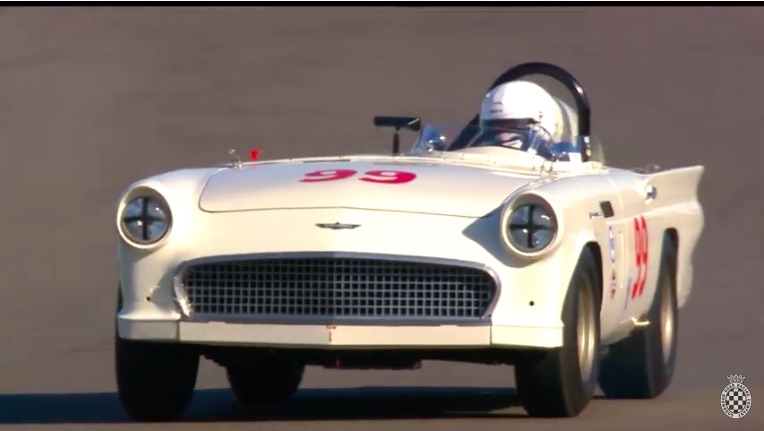 There are exceptions to every rule, right? Generally speaking, I strongly dislike Ford Thunderbirds made from their start right up through the 1970s. After 1957 they became these weird, porcine, ugly, flabby, slow tanks. The earlier cars are cool but they typically strike me as toothless cruisers. Is all this harsh? Sure, but it is also my personal taste and that means like yours, it is completely subjective. The exception to my Thunderbird rule is right in front of you, the Battlebird.

Now, this is a recreation of a machine that Ford had built in 1957 to take on the Corvettes head-on. Two of these machines were built (this is not an original but an awesome recreation). Pete DePaolo of California built them and they were the meanest Thunderbirds Ford ever commissioned themselves.

The two cars that were built had different engines. One had a stroked Y-block that measured 347ci and used fuel injection, a supercharger, and at least once dual blowers to make its power. This as effectively a 400hp mill which was saying something for the day. The other car used a big MEL engine to achieve about the same horsepower level but the huge engine added lots of weight to the nose.

DePaolo added dual shocks per corner on the car, changed the spring rates, lowered the car, and reworked the front end to make the whole program work better. It did. In high speed testing, the smaller displacement car ran 204mph! Marvin Panch further proved the car’s prowess when he drove it to a second place finish on the New Smyrna Beach road course. His sole job was to beat the Corvettes and he did, finishing second to Carroll Shelby who was driving a Ferrari. The Battlebird had earned its name.

After the 1957 season Ford pulled out of racing and the cars floated off into obscurity. The 312 Y-block car still exists, the MEL car was wrecked on a movie set apparently and is gone forever. That said, this faithful recreation is an awesome window into the Ford vs Chevy rivalry’s past!