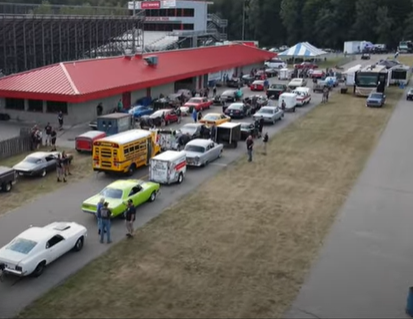 Hot Rod Magazine’s Drag Week just got done and everyone is talking about it. The livestream gave you guys all the action, but not the behind-the-scenes stuff you expect from 1320Video. Fredd and Kyle and the crew were on hand making sure you got all the action on the road, on the track, and in the pits like they always do, and we love them for it. We’re going to show you each of their daily videos, one at a time, so you can relive it just like you were there. It’s an event we’ve supported since the beginning, and the original drag and drive event, and it looks as tough and exciting as ever. Don’t you think?

In this video you get to see Day 0, aka Tech Day, where all the cars and trucks go through tech, and get to make test and tune runs. The test and tune runs are good and bad, because sometimes cars break during test and tune and that gives them the chance to fix stuff before racing starts the next morning. Othertimes they make it through the week only to break on the last pass they need to be good. That kind of sucks if the extra run you made during testing didn’t do you much good but instead made the car not make it through the week.

Finnegan And Newbern Try Not To Kill The Barn Find Pro Street Firebird Before Rocky Mountain Race Week 2.0 FREE LIVESTREAM! $100,000 Up For Grabs Today At The Superbowl Of Bracket Racing! More Than $600K On The Line Total!