B. FORCE AND HIGHT RACE TO PROVISIONAL NO. 1 SPOTS AT LUCAS OIL NHRA NATIONALS Video Highlights And Full Qualifying Results 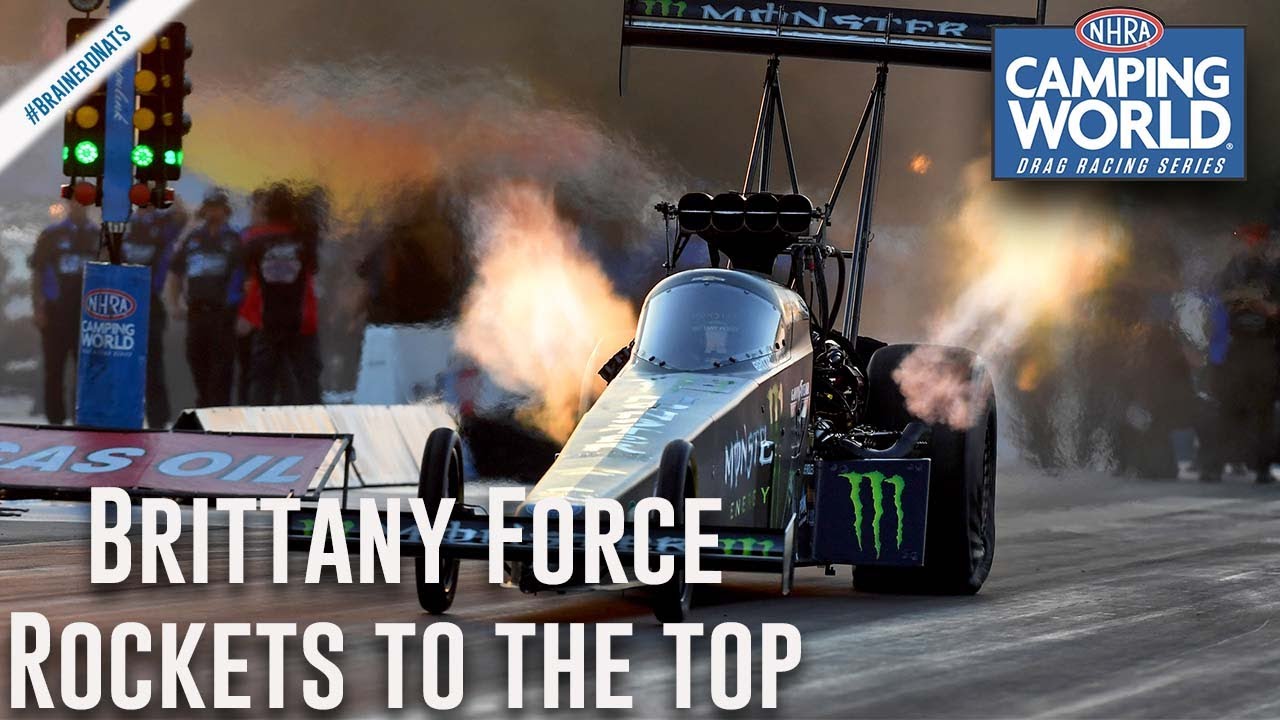 NOTE: Brittany Force and her Top Fuel dragster team powered their way to a stellar 3.685-second lap at 333.49 mph to kick off the Lucas Oil NHRA Nationals at Brainerd International Raceway.

NOTE: Funny Car points leader Robert Hight continued his dominance on Friday at Brainerd International Raceway when he cruised to a stout 3.865-second pass at 330.31 mph at day one of the Lucas Oil NHRA Nationals.

BRAINERD, Minn. (Aug. 19, 2022) – It was a memorable qualifying day for John Force Racing on Friday at Brainerd International Raceway as Top Fuel’s Brittany Force and Funny Car’s Robert Hight raced to the provisional No. 1 positions at the 40th annual Lucas Oil NHRA Nationals.

Force, the current Top Fuel points leader, powered to the top with her run of 3.685-seconds at 333.49 mph in her 11,000-horsepower Monster Energy dragster at the 15th of 22 races during the 2022 NHRA Camping World Drag Racing Series season. If that holds, Force, a four-time winner in 2022, would pick up her sixth No. 1 qualifier this season and the 38th in her career. After struggling during the first qualifying session, Force and her team delivered an impressive run with the sun starting to set. That came after a 90-minute weather delay as Force, who won at Brainerd in 2016, enjoyed a strong run at the ideal time.

“We were very happy with that second run, especially after not making it down there in the first one,” Force said. “When the rain came, we got a little nervous about getting in a second session tonight, (but) NHRA got it cleaned up quickly, and (crew chief David) Grubnic came in and said it was a great racetrack. I love night racing. There’s nothing cooler than watching drag racing at night. Seeing the header flames, it was my favorite thing as a kid in the grandstands. We saw what was capable ahead of us and we knew we could get it done, and we ran exactly what we wanted. I love this racetrack, we always lay down good numbers and we’ve had success here before so we’re hoping to get it done again.”

Hight jumped to the top during the final qualifying session on Friday in Funny Car, delivering a remarkable 3.865 at 330.31 in his 11,000-horsepower Auto Club Chevrolet Camaro SS. If that holds, the Funny Car points leader would earn his fourth No. 1 spot this season and 75th in his career. Already a six-time winner during what’s been an incredible 2022 season, the next goal on Hight’s list is trying to pick up his 60th career win. After Friday’s performance to open the race weekend, Hight is hopeful that comes in Brainerd, where he has one career victory. With ideal weather conditions for the rest of the weekend, Hight knows he’ll have to be on top of his game to do so.

“First off, NHRA did an amazing job drying the track and giving us great conditions to make some great runs,” Hight said. “This is a breath of fresh air after where we’ve been with the humidity and heat. This is great conditions, and it looks like we’re going to have it all weekend, so the fans are in for a treat. There are going to be a lot of side-by-side close races. This Auto Club Chevy, we made two runs in the 3.80s today (and) you have to be happy about that. Great job to my guys. Two consistent runs, this is exactly what we need to be doing this time of year, making consistent runs, because we’re heading into crunch time. I’m excited where we’re at for this point in the season.”

Bob Tasca III, who won last weekend in Topeka, got bumped from the top position but remains in second with his pass of 3.881 at 331.45. Tasca is after his third straight No. 1 qualifier and his third victory in the past four races this weekend. He was also the top qualifier last year in Brainerd. Defending world champ Ron Capps, who is a six-time winner at the facility, is currently third thanks to his run of 3.885 at 328.46.