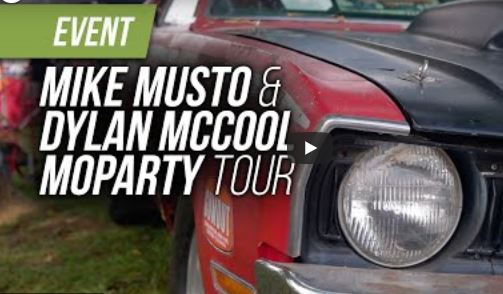 Moparty is a party in every sense of the word, and an event like none other. THis is a race, a show, a spectacle, and more and when it invades the grounds at Beech Bend Raceway Park in Bowling Green Kentucky there is no doubt that fun is going to be had by all in attendance. This show has some special features that you won’t find anywhere else, like a great Mullet contest, General Lee jumps, a Wing Car Parade like non other, and more.  We love this event and we’re not alone.

In this cool video, featuring Dylan McCool and Mike Musto, you’ll get the full tour of Moparty 2021 and don’t forget to join us in Bowling Green in September for Moparty 2022!

What is it like at Holley’s MoParty? We decided to get a couple of Mopar-minded friends of ours to show you a couple of the cars we had at the show and to let them give you their insights. Dylan McCool has been rebuilding Mopars on YouTube for a few years (and we’re big fans of his 1973 Challenger restoration) and Mike Musto has been in the game for years with his “Mr. Angry” Charger and “Angrier” Daytona. Don’t take our word for what MoParty is like…take theirs!