We HAVE OIL PRESSURE! The Record Setting Gen V LT Motion Raceworks Nova Is Back In Action!

Aug 22, 2020Chad Reynolds1320 VideosComments Off on We HAVE OIL PRESSURE! The Record Setting Gen V LT Motion Raceworks Nova Is Back In Action! 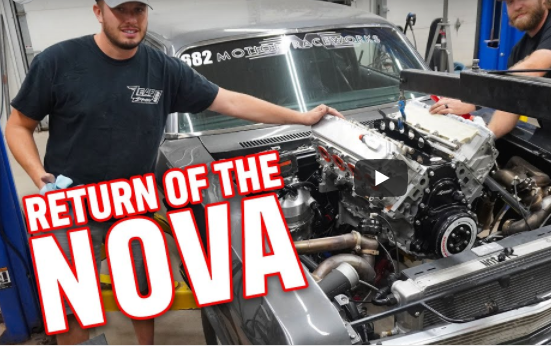 Well…… it turns out the problem with Doug Cook’s Motion Raceworks Nova may not have been what was originally thought. You’ll remember that this 7 second machine made huge power on the dyno just days before Rocky Mountain Race Week and then on day one of Race Week has an oil leak that made them look at the oil tank, which then made them find metal in the oil. Like smart people they decided that it was time to pull the plug and not ruin this expensive engine. Instead they raced Wally, the awesome FB Marketplace purchased Crown Vic that got copious amounts of Nitrous all week. When they got home the engine came out of the Nova, got sent to the machine shop, and that’s when things get…well…confusing? Well maybe not confusing. Curious? Interesting? Puzzling?

Or maybe it’s lucky. Either way, the engine is back from the machine shop, Doug and the gang are getting ready to put it back in, and they are taking all of us on the whole fun adventure to show just what is going into the beast before it has to get some testing done so it can leave on Rocky Mountain Race Week 2020 2.0 in a few weeks.

Watch the video, hang with the crew, and Doug will attempt to explain just what went wrong and how they fixed it.