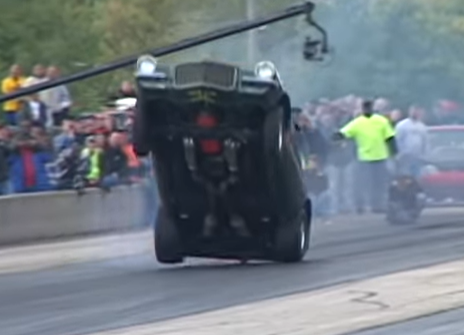 This is some great never before seen stuff right here folks. It was originally filmed for TV and other outlets, so most of this has only been seen in clips, but now thanks to our friends at Urban Hillbilly Videos you get to see it all! If you are not familiar with the Byron Dragway World Power Wheelstanding Championships then you are in for a treat. It is kind of amazing this event was ever allowed to happen, let alone become as huge as it has over the years. It is full of action, with lots of wheels in the air fun, but it also creates a LOT of carnage. Suspensions, headers, oil pans, chassis, wheels, tires, you name it they have all succumb to the harsh realities of trying to hang the hides for as long as possible down a dragstrip.

Yes there are some cars that specifically have been modified to perform better in this competition, but none of them are “wheelstanders” like you would see as entertainment during a regular drag race. These cars have to leave the starting line hard to get the wheels in the air and then see how long they can keep them there before crashing. Or without crashing I guess I should say. At any rate, they go at it like crazy, and some are more successful than others. But if you like wheels up launches then this is the event for you without a doubt. Just watch, it is a riot.