Rinus Veekay, The Indycar 2020 Rookie Of The Year, Crashes Hard At Indy During Testing

Apr 10, 2021Chad ReynoldsApex Racing News, Apex VideoComments Off on Rinus Veekay, The Indycar 2020 Rookie Of The Year, Crashes Hard At Indy During Testing 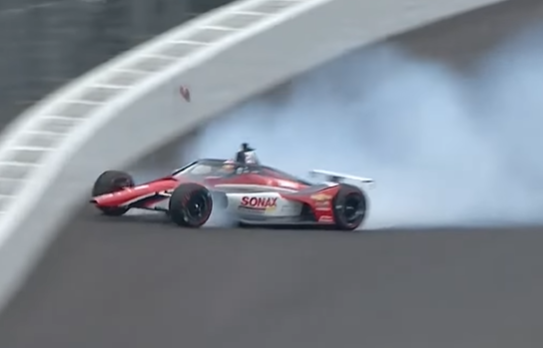 The fact that he walked away from this crash without more than a bit of soreness is an absolute testament to the changes that have been made to open wheel race cars in the past three decades. Besides the cars, the Safer Barriers have also been a game changer, and I mention them both because when you see this crash from this week’s testing at Indy you will cringe. Rinus Veekay, the 2020 Indycar Rookie of the Year, is hauling the mail through turn one and into turn 2 when the car gets loose, grabs the grass and spins hard, and goes into the barrier on the exit of turn 2 nose first.

This video, by NBC Sports, shows the crash from multiple angles, includes commentary and analysis, and ends with an interview with Rinus himself as he exits the infield care center at Indianapolis Motor Speedway. There is no doubt that the car was flying, but there was no odd line or anything that should have resulted in the car being this loose considering the fact that he’d put down a few laps already in the car. Whatever the reason, this car will NOT be competing in the Indy 500 as the team will have to be pulling out another car. Ouch.

468 vs 496: Does The Size Of Your Big Block Matter That Much? Or Is It More The Motion Of The Ocean That Counts? The Flare Witch Is One Bad Ass Nash American Station Wagon You Just Can't Help But Stare At