Jun 05, 2016Eric RoodApex Video, BangShift APEXComments Off on Tony Quinn’s 850-horsepower Ford Focus is a proper Pikes Peak beast from Down Under 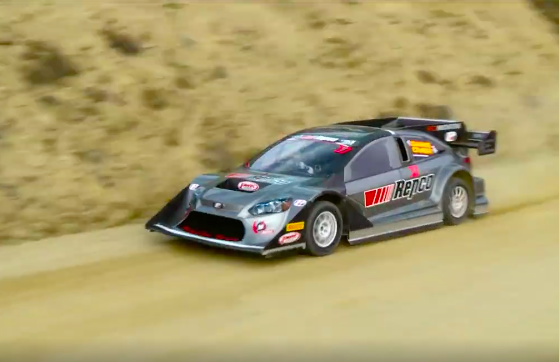 Every year, Pikes Peak International Hill Climb brings some of the biggest automotive freaks out of the woodwork with some fascinating and unique one-off machinery. Certainly, Nobuhiro “Monster” Tajima and Rhys Millen are among those and both will have their respective electric beasts on hand at Pikes Peak, but Tony Quinn has an especially bonkers treat from Down Under in store for the hilll climb. Quinn, an entrepreneur who was born in Scotland but resides in New Zealand, will have his bespoke 850-horsepower Ford Focus on hand.

The car is really a Focus in name and general body-panel appearance only. Underneath, it’s a complete tubeframe build from Pace Innovations and Paul Ceprnich, who has designed a number of high-profile Australian race cars like the Next Gen V8 Supercars car and the MARC V8s that have run in several endurance series. Quinn’s Focus sits at just a tad under 2,100 pounds, which is extremely light when the massive aerodynamic devices can generate more than two tons of downforce at 120 mph. This thing will stick to the paved Pikes Peak tarmac and with its Nissan GT-R’s 3.8-liter V6 gobbling up 20 pounds of boost to kick out 850 ponies, it will certainly go.

The Focus will race in Pikes Peak’s Unlimited class, where he will square off against experienced professional drivers like Romain Dumas in a Norma M20 and Mike Skeen in a Radical RXC Turbo 500. Quinn himself is not a professional driver, although he does compete in the Australian GT championship (which Quinn owns) and the Focus debuted at the 2015 Repco Race to the Sky put on the New Zealand’s Highlands Motorsports Park (which Quinn also owns). He’s certainly an experienced GT driver, but we’ll see in a few weeks time how he handles a car with sinkhole-creating levels of downforce.

Here’s the Focus in its debut at Quinn’s Race to the Sky in New Zealand last year.

Scrapple, Your Guide To The "meh"-Worthy News! This Week: Pink Bugs, Bad Gears And More! The BS Top 11: Most Violent and Hardcore Parts/Substances