Apr 28, 2017Craig FitzgeraldBangShift XL, XL Truck FeatureComments Off on This 1957 NAPCO-Converted Chevy Panel Truck Is RADIOACTIVE and We’ve Got The Whole History From the Company That Originally Bought It 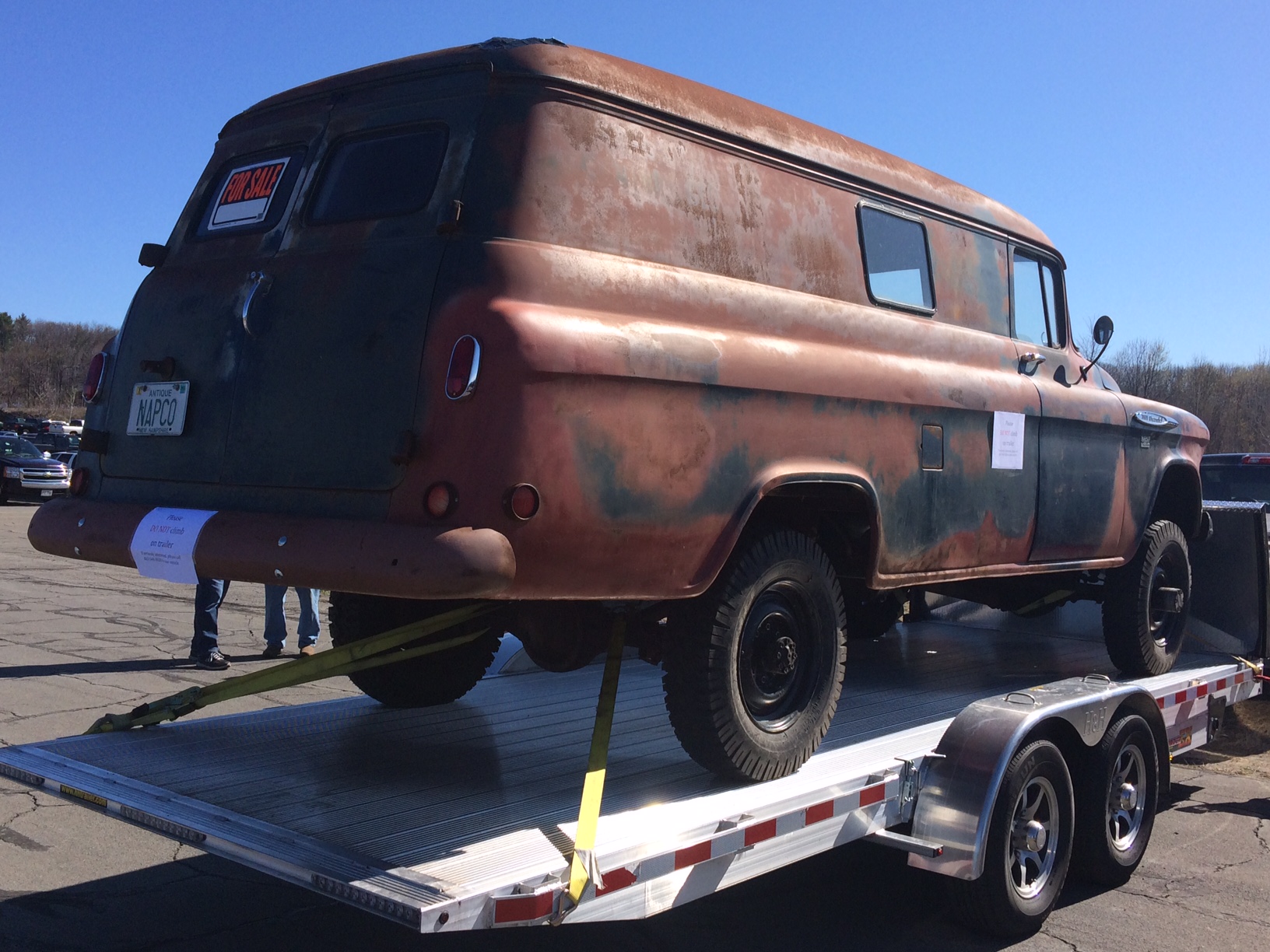 A few days ago, we rolled into the always awesome Early Ford Model A Club annual swap meet in Fitchburg, Massachusetts. As usual, we were expecting to see some cool vehicles in the informal “show” section on the airstrip, but we spotted this gargantuan, 1957 Chevy 3800 Panel Truck from a quarter mile away and couldn’t wait to get a closer look at it. It holds some secrets that we were dying to figure out, so we got in touch with the people who originally bought it to learn more. 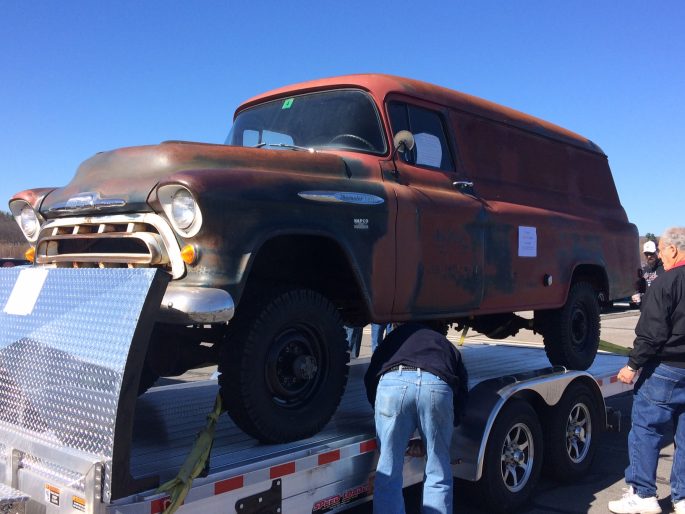 1-ton panel trucks are pretty rare in general. Throw in the fact that this one had a full NAPCO conversion from the factory, and that it made it 60 years without as much as a rust hole in its tender rocker panels and this thing is like James Bond Aston Martin DB5 rare. 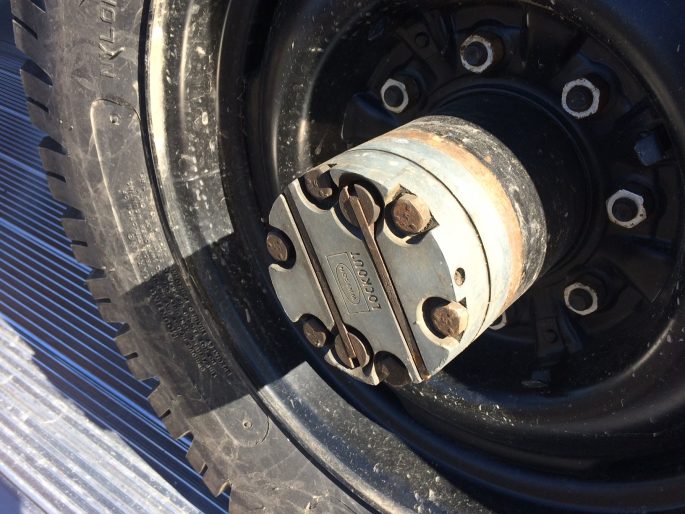 We probably don’t need to go into great detail, but in case you’re not aware, four-wheel drive wasn’t offered by Chevrolet as a matter of course in 1957. If you wanted it, you could order it through your Chevy dealer, who would assign RPO 690 to the order form. For your additional $2,549 (for a one-ton), Northwestern Auto Parts Company (NAPCO) would add about 1,500 pounds of additional hardware, and in a matter of a few hours, with just a handful of holes drilled in the original chassis, you had four-wheel drive. 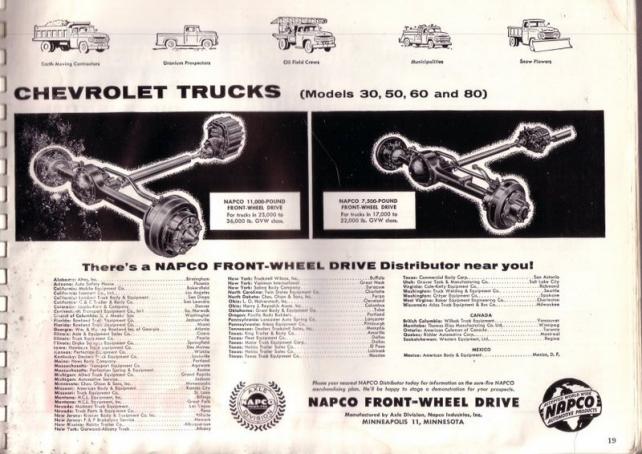 These trucks are rare because not many people or companies ordered them this way to begin with, and NAPCO only provided its Powr-Pak kits for this bodystyle between 1956 and 1959. When the trucks — and their front suspensions — were updated for the 1960 model year, NAPCO quit offering the conversion. 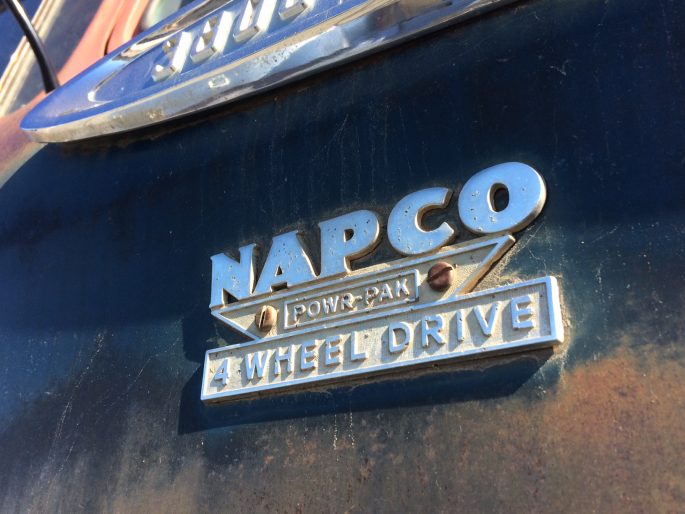 We dug all over this truck and its condition was remarkable. Yes, it’s got rust on just about every exposed surface, but there wasn’t a single place we could find that the rust had bored a hole in the sheetmetal. Everything looked solid, both in the bodywork and the frame underneath. Best yet, it was all complete, and it looked like a wrench hadn’t been applied to it in years. 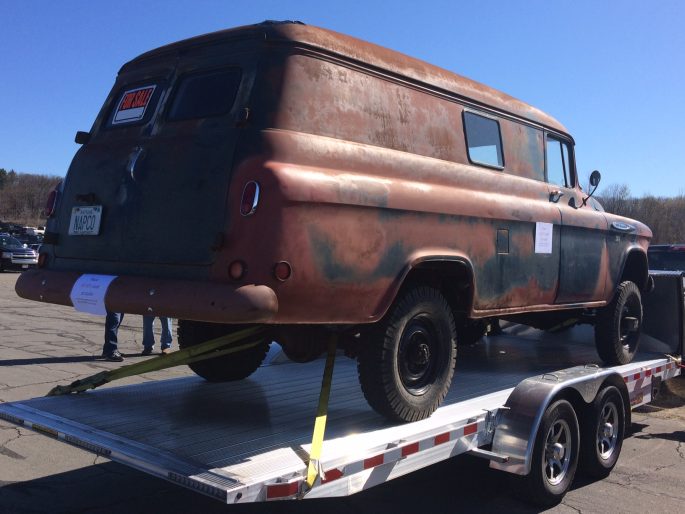 Then we got intrigued with the markings on the side of the 3800. The easiest to make out were the logos on the doors: “Century Geophysical Corp., Grand Junction, Co.” along with the DOT weight markings. 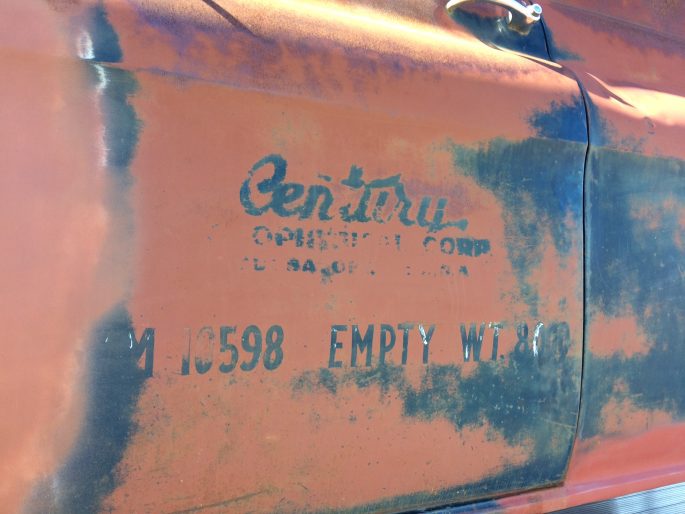 Not as easy to decipher was the lettering on the right rear panel. We examined it from every angle and finally, we could make out something about a “LOGGER” and “Uranium Division,” but the rest of the letters seemed like a jumble. We figured that the truck was used in some kind of logging operation near the Black Canyon of the Gunnison.

That was, until we got in touch with the company that bought the truck originally in 1957.

We Googled Century Geophysical and figured out that the company is still in business, as it has been since 1946.  Century Geophysical — based in Tulsa, Oklahoma — specializes in the manufacture of state of the art geophysical data acquisition instruments for both cased and open hole mining operations.

We sent an email via its Contact Us page, figuring we wouldn’t hear back and we’d have to call.

Within an hour, though, we got a response from Brian Peterson, Century Geophysical’s US Operations and Sales Manager:

“That’s quite a find,” he wrote. “Not sure if it one of these old units, but thought you may find the pictures interesting to say the least.  The two photos from the Grants, NM uranium mining museum that I visited several years ago.”

The first photograph shows a crew attending a drilling operation: 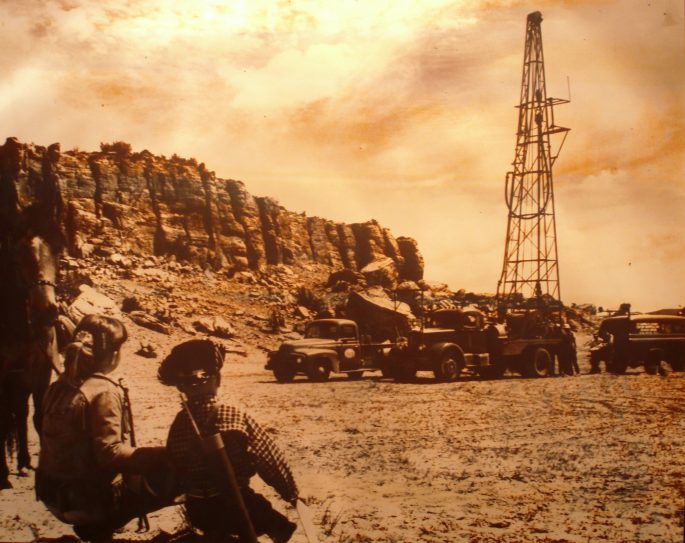 If you zoom in far to the right, that certainly looks like our NAPCO-converted 3800. 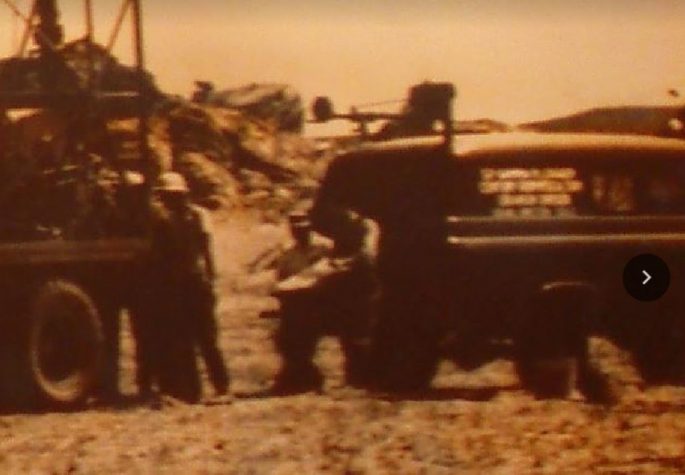 Better yet, Brian sent along a newspaper article from the Tulsa Tribune, from June 14, 1957: 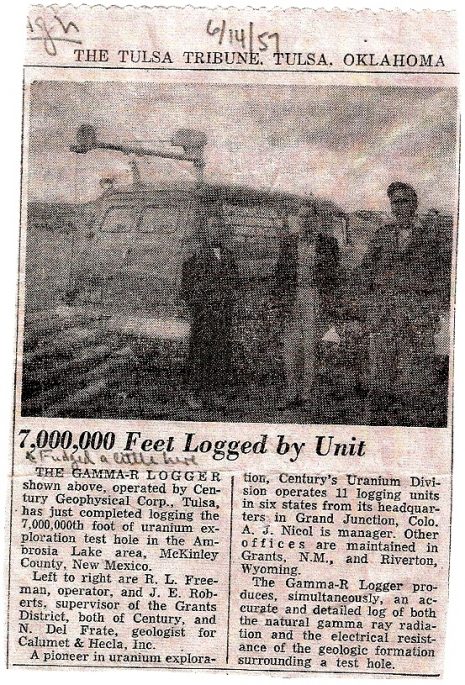 It’s grainy, but you can clearly see the lettering from the side of the truck: 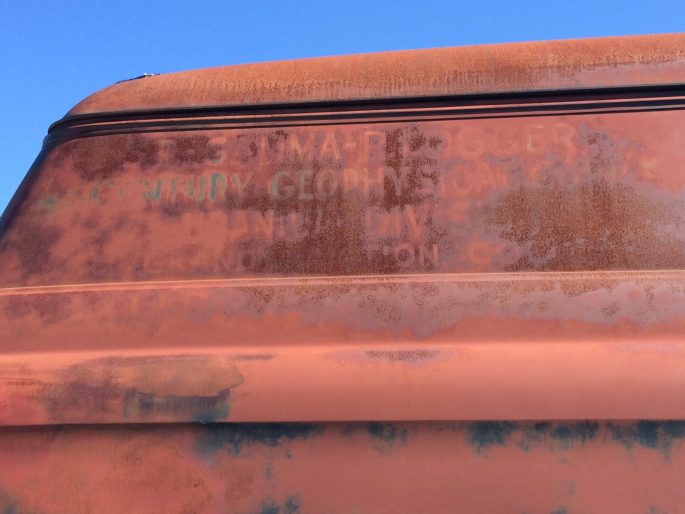 “LOGGER,” in this case, means that the truck wasn’t logging lumber, but data in the never-ending quest for uranium during the height of the Cold War.

“The Gamma-R Logger produces, simultaneously, an accurate and detailed log of both the natural gamma ray radiation and the electrical resistance of the geologic formation surrounding the test hole,” reads the piece in the Tulsa Tribune.

This is one of eleven of those trucks. Chances are good that this isn’t the exact truck, because it was stationed at the Grand Junction, Colorado location, and the photo comes from the Grants, New Mexico, location. But all eleven of those trucks must’ve been ordered at the same time. The Grants truck appears to have had the same NAPCO conversion.

What’s truly amazing is this pitch to dealers to sell NAPCO conversions in the 1950s:

If you look at the lower right, the flyer lists several potential customers for such a conversion, and the first one is “Uranium Prospectors.” Uranium mining was so hot (see what we did there?) in the 1950s that uranium prospectors were a key demographic for NAPCO.

This thing is an amazing piece of history, and it was a treat to see that it made it’s way through 60 years and 3,000 miles to a tiny airstrip in eastern Massachusetts.

We contacted Brian Hanlon from Londonderry, New Hampshire, who owns the truck now. He found it in Southern California two years ago. Brian confirmed that the truck is registered and inspected for road use now, as evidenced by the New Hampshire license tag. “All it takes is the lightest touch on the starter button and it fires right up,” he says. He’s been a NAPCO collector for 35 years and he’s blown away by just how solid this truck is.

Killing Honda Jokes, One At A Time: This Is The Most Evil Integra On The Planet! RJ Anderson Is Back With A New Video! XP1K4 Has Jumps, Stunts, And A Wall Of Death!