Can Halfass Kustoms Get This Seized 1951 Chevy Pickup Running And Driving Since It Last Ran In 1976?!

Oct 31, 2020Chad ReynoldsXL VideosComments Off on Can Halfass Kustoms Get This Seized 1951 Chevy Pickup Running And Driving Since It Last Ran In 1976?! 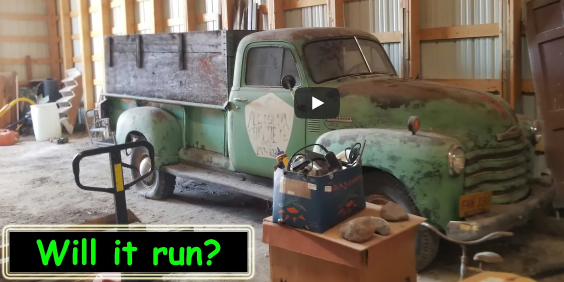 Halfass Kustoms doesn’t always do things the way that some fancy shop might, hence the name, but they certainly get results and we love that. I wish I was half as good at getting stuff done as they are, but that’s a completely different topic. Ultimately you’ll just have to watch and see just how stuff happens around there. I have to say, sometimes cars that have been sitting forever are easier to get running than people realize. Others are absolutely horrors that just never seem to cooperate. I’ve seen engines start with just a spray of brake clean, the best starting fluid ever by the way, and then I’ve had ones that just didn’t want to run no matter what you gave them. Seized engines are of course a completely different ballgame, and getting them to turn is often much more work than the actually running part can be.

And the worst part about a seized engine is that sometimes you don’t have a clue why it is seized. Is it stuck rings, which can usually be fixed with liberal amounts of spray lube and some time, or is it a spun bearing that caused the engine to seize and end up in a wrecking yard or parked or whatever? There are all kinds of other moveable parts in an engine that can seize up and hold the engine from spinning as well, but sometimes you get lucky. Will they get lucky here?

This 23,000 Mile 1985 IROC-Z Z28 Camaro Is A True Survivor. Too Bad We Can't Get Any Other Info From The Seller! If The Only Rule Was It Had To Have A V8, What Would You Race? Here's What Showed Up For The V8 Run What You Brung Race at Hudson Speedway