Hammertown: The Sequoia Beast Is A True Story Of One Man, One Husband, One Father, One Truck Builder, Attempting The Every Man Challenge 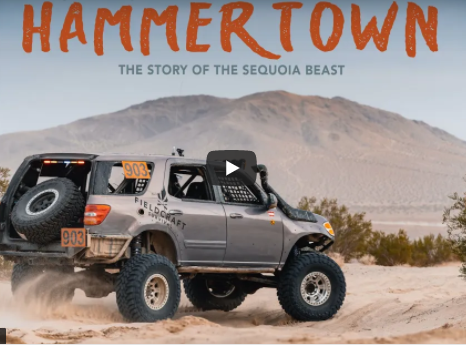 King of the Hammers is a bad ass race. I’ve been several times, and every single time I leave thinking just how awesome it is. And just how much I’d love to be racing in it. I can’t explain it, but I’ve only been to one other off-road race that compares, and that is the BAJA 1000. Like the 1000, King of the Hammers has a bunch of classes running the race, on basically the same course. Unlike BAJA, each class either has their own day, or their own partial day, to run their race. The terrain is just too gnarly to have multiple races going on at the same time. And while King of the Hammers, the biggest and baddest of the races is the one that garners the most attention, it is the Everyman’s Challenge that really commands some serious respect.

In the last couple of years the Everyman has found itself full of a wider and wider range of vehicles, including stuff that would typically be running King of the Hammers if they had a bigger tire on them. Oh yeah, Everyman is limited on tire size. Like drag racing, tire size can be a really big thing in off-roading. Especially when you are talking about rock crawling, which is a pretty significant part of the entire Hammers courses. Taller means easier to climb over stuff with. It’s simple physics and geometry.

In this video you’ll see the story of a husband and wife, with a select group of friends, who decided to take a very unlikely rig and turn it into an Everyman race truck for King of the Hammers week. Well to be fair, the decision was his, the permission was hers, and the friends seem too gung ho to think it wasn’t an epic idea. This is a really REALLY good story, and a great video to watch.