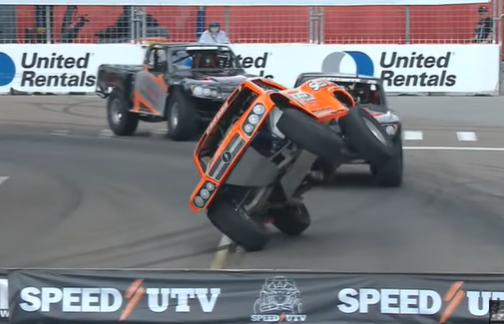 If you are a regular here at BANGshift.com then you know that I dig the Stadium SUPER Truck races. I’ve been lucky enough to hang out with Robby Gordon and a few of these trucks, even before son Max was big enough to reach the pedals. These trucks make 650 ish horsepower, are all equipped with nearly identical components, and that makes super close racing in an environment you might not normally expect. They race these on the tarmac, with jumps made of steel, and that means three wheel corners, lots of banging and bashing, big air, and lots of sideways cornering. Robby’s son Max, just 12 years old, is now racing a Stadium SUPER Truck, and it is super fun to watch. It’s off-road style racing, in town, and in front of crowds that are used to watching open wheel racing instead of big tired trucks.

With that said, the names racing in this series are names you expect to see on an Indy Car ladder, not off road trucks. They race twice at each race venue, and the races start with an inverted order based on points and then stop at the halfway point for a mandatory caution that tightens up the trucks for a side by side race to the finish.