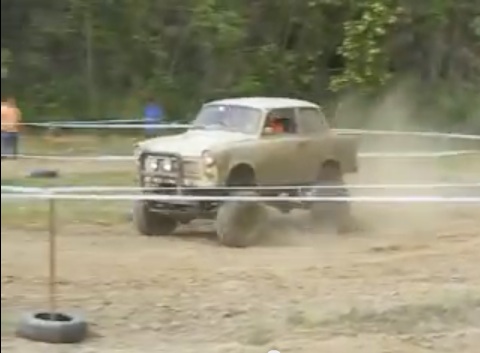 The lowly Trabant 601, the car that took three people to assemble: one to cut, one to fold, and one to paste. These two-stroke-powered little beasts were the most popular car in East Germany, but after the fall of the Berlin Wall in 1989 they became nearly worthless pieces, as they were abandoned for used cars they hadn’t seen before that were more efficient, more reliable, and a damn sight faster. Nowadays the Trabis are regaining some of their value as a throwback item, and with some modifications and an engine swap, a Trabant can be a lightweight performer.

This, though, might be the first 4×4 Trabant we’ve ever come across. Details are scant, especially since I can’t read anything in Polish. The only thing that is known is that it’s powered by a V6 engine from a Ford Scorpio. The super-Trabant looks fairly nimble as it runs around the course and the V6 has plenty of power to move it along. However, after watching the whole video, you might agree with me when I say that the track could stand to be widened.

Beating A Live Horse: This King Cobra Mustang II Gets Flat-Out Abused And Comes Back For More Carnage Video: Wreckage From Pikes Peak - Fire and Falls, This Video Has It All