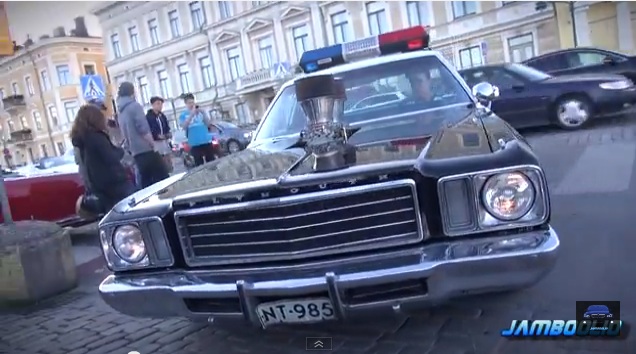 A Chrysler-based cop car made between 1969 and 1978 wasn’t anything to play with. While slant six and 318-powered squads did leave the factories, both the B and C-body cars got big-blocks, which made the huge bricks unbelievably fast. The 1969 Polara Pursuit 440 is one of the most mythical police cruisers ever created, with performance that held it’s own until the mid-1990s. But just because they were built during the smog era doesn’t mean the later cars are dogs…far from it. 440s and 400s were plentiful and such good parts as 727s and 8.25 rear axles with good gears were standard.

Our friend Fred Timmons turned us on to this evil 1977 Gran Fury that now lives in Scandanavia (we believe Norway, but we aren’t 100% sure). The 440 has been tunnel rammed, the rear wheels look to have been widened a little bit, and the two cannon-sized exhaust pipes just might be able to drown out the siren. This is the patrol that every cop in the mid-1970s dreamed of getting the keys to. “Wow, Officer, you must’ve been hauling ass to catch up to me!”

This Throwback Look At The Lincoln LSC Shows That A Good Design Can Age Well Burnout Video: Frying Tires In An Aston Martin V8, Just Because