The Alaskan Army Truck! Dirt Every Day Builds Their CUCV Chevy Up For A Romp In The Wilderness!

Nov 30, 2016Bryan McTaggartBangShift XL, CHEVY, RACING & ACTION, TRUCKS, Videos, XL VideosComments Off on The Alaskan Army Truck! Dirt Every Day Builds Their CUCV Chevy Up For A Romp In The Wilderness! 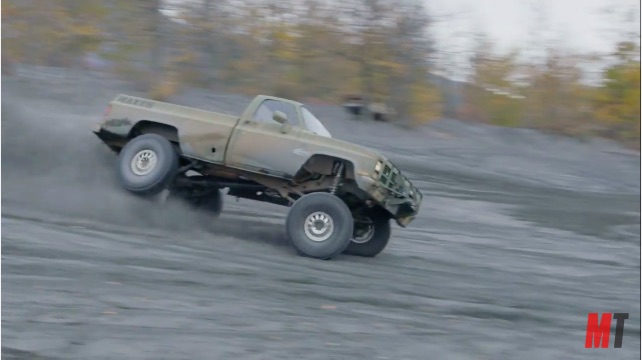 Normally, Dirt Every Day’s Fred Williams builds some of the most insane, mental and questionable off-roading units around: a Plymouth Roadrunner with a diesel, a Jeep that goes full submarine, and the unholy combination of a Land Rover and a Ford Ranger, for example. But every now and again, he builds some of the most wicked, drool-inducing trail toys that we’d love to…what’s the word…”appropriate” from his yard. Case in point is the Alabama Army Truck, a 1986 Chevrolet K-30 CUCV pickup that has been “the” vehicle of Dirt Every Day. It’s a fan favorite, it’s badass in CARC green paint, and for a while now, it’s been missing in action as some of the freakier builds have taken precedent. But it’s back and better than ever, and it’s going to Alaska for a trip. Repowered with an 8.1L V8 yanked from a Suburban, fitted with portal drive units at all four corners and massive Maxxis rubber, the CUCV is badass and is ready to take on the trails of Alaska!

Money No Object: This 1969 Cadillac DeVille Wagon Is A 1-of-5 Factory Unicorn! Store Bought C Clamps Kinda Suck! ChuckE2009 Shows How To Build Your Own