This Ford Model A Mud Dragger Is Ferocious: 650-cube Big Block And Under 3,000 Pounds! 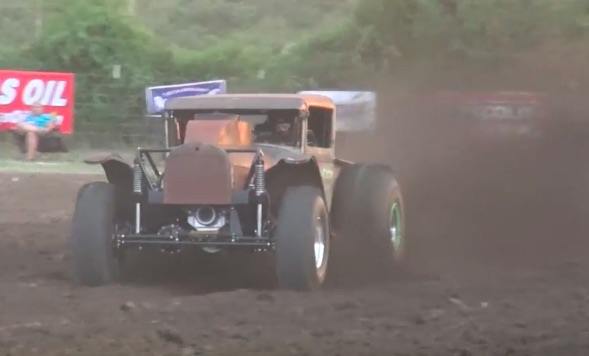 When the Ford Model A debuted in 1928, the standard engine was a 201 cubic inch four cylinder that made all of forty horsepower. With over three times the engine capacity, and well over 1100 horsepower of nitrous-enhanced muscle over the original lump that powered it, this Model A…ok, this mud dragster wearing Model A body parts…goes from being the poster vehicle of the Great Depression to digging out great depressions in the dirt with cut-down Boggers. Riding on a chassis built by Brian Jackson at Evolution Fabrication, the Model A doesn’t threaten to torque itself into a cinnamon twist…which, had this engine been in the stock rails, would’ve certainly happened.

The guys from Triple-X Motorsports found the Ford and it’s owner, Jason at the Mud Down in T-Town event in Tulsa, Oklahoma, where the rig was making it’s first passes in the Renegade class, meant for “trucks and jeeps that have been highly modified for competition. Although these vehicles can be gutted, they must appear stock and must utilize a full factory frame in their chassis.” Not to nit-pick, but there is a bit of liberty being taken with calling this Model A “stock appearing”, don’t you think?