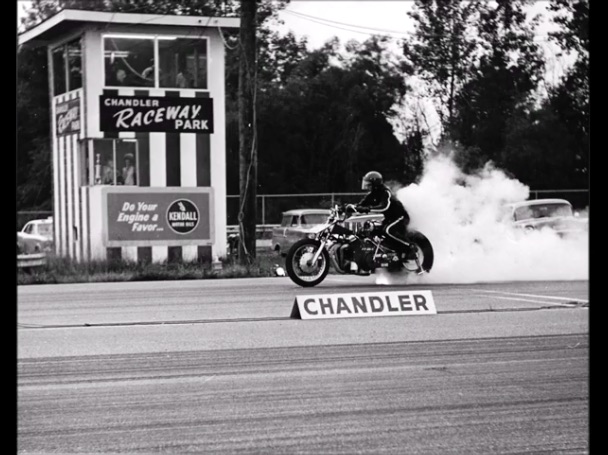 Now this is some magically awesome stuff. You are about to listen to a collection of several drag strip ads from Indiana’s Chandler Raceway Park. These were made back in the early and middle 1960s and they capture the era perfectly and they capture the marketing methodology that as employed at the time as well. Being that most of you have either attended or continue to attend drag racing events, you understand the feel and gravity that certain cars and people have. Imagine amplifying that by 1,000% on the radio because that’s exactly what you are going to hear…here.

We love that the audio is so crisp and clear on these. The fact that the first ad is completely based around EJ Potter and his motorcycle, then called Bloody Mary. The guy’s tone and the whole way they speak about the machine is perfect and if you were a kid that loved cars, how could you possibly NOT go and see this contraption?! During the TV Tommy Ivo ad they actually promote his truck as one of the attractions at the event. How radical is that? Ivo knew that the whole package was what people wanted to see and the track knew that too. By promoting not just the car and driver, but also his hauler, it added to the whole program.

The last two ads are about wheel standers which were really coming into their own at this time in drag racing. Bob Perry’s insane looking Fugitive Corvette and Bill “Maverick” Golden’s Little Red Wagon were among the most well known wheelie machines in the country and they were going to race heads up rather than make singles at this event. As much as we take this for granted today, it was big stuff back then.

We could go on for days with this one but we’ll just tell you to listen!