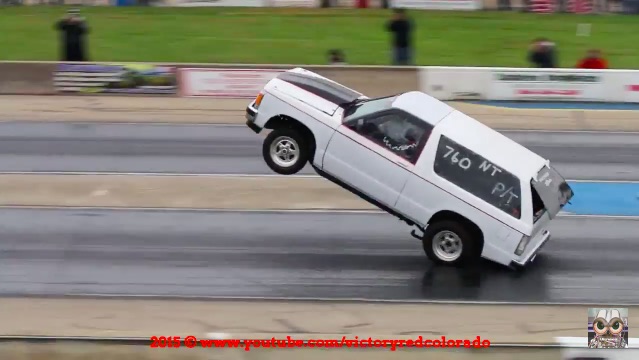 The World Power Wheelstand Challenge isn’t a race. It’s simply a game of one-upmanship: who can hang the hoops higher, who can do the longer burnout, who can make it all the way through to the final round of competition and who is the best overall showman. Several players that have been doing this gig for years were present: Jeff Wild and his 1970 Buick convertible, Jason Schubert’s 1978 Olds Cutlass, and surprisingly, Brian Ambrosini and his bright orange AMC Gremlin were all present, but a solid field of challengers kept the old dogs of this wild event, now in it’s 21st year, on their toes. Wes Newman and his “Hollywood” 1968 Camaro looked promising, but carnage aplenty out of the green F-body earned him the “Most Violent Wheelstand” award. David Dauben’s 1986 Chevrolet S-10 Blazer took “Most Unique Wheelstand” when it tried to roll left during the wheel stand. There were lane swaps, wall brushes, plenty of broken parts so on, and in the end Schubert and his Oldsmobile were the victors, with Ambrosini taking runner-up.

Maple Grove Glory Days: More Car Show Photos Featuring The Coolest Iron At Da Grove Petrolicious Goes On An Off-Road Excursion With A Toyota FJ40 - Hear The Story Of One Family's Journey With This Off-Roading Legend!